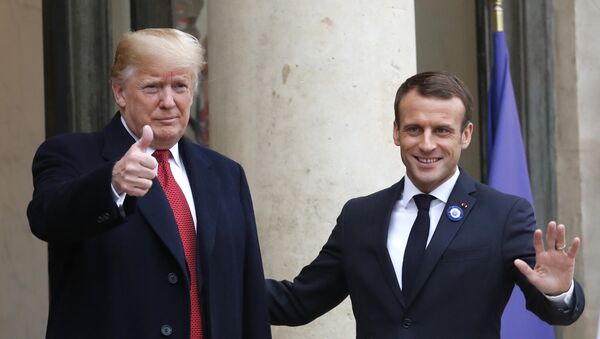 © AP Photo / Thibault Camus
Subscribe
International
India
Africa
A number of factors had reportedly contributed to the US president’s foul mood, including the gains made by Democrats during midterm elections and apparently unfavourable media coverage of his decision to skip a ceremony honouring the military sacrifice of World War I.

US President Donald Trump was left "frustrated" with his recent visit to Paris, a White House official cited by The Independent has revealed.

"He was frustrated with the trip. And he's itching to make some changes. This is a week where things could get really dicey," the official said.

World
'Common Decency': France Berates Trump for Twitter Crusade Against Macron
The US president was reportedly vexed by a number of factors, including the gains made by Democrats during the midterm elections at home and the media coverage of his decision to "skip a ceremony honouring the military sacrifice of World War I."

According to the newspaper, Trump was also "plotting a shake-up in his administration", telling his advisers that he considers replacing Homeland Security Secretary Kirstjen Nielsen and White House chief of staff John Kelly.