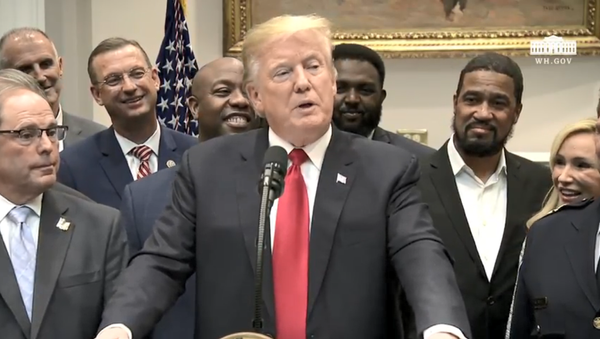 US President Donald Trump announced in a press conference Wednesday that he was "thrilled" to announce his support for the First Step Act, a bipartisan criminal justice reform bill.

Noting the bill address the "crucial issue of prison reform," Trump called the First Step Act "a big first step" toward that end.

"I am thrilled to announce my support for this bipartisan bill," he said, stopping to ask "did I hear the word bipartisan?"

We are "all better off when citizens can rejoin economy," Trump said, noting that former inmates are "actually able to find jobs" because of the strength of the economy. "I have three instances of companies hiring people coming out of prison…[and they are] so thrilled by the performance of these people," he said.The First Step Act passed the House by a wide margin of 360 to 9 in May, although it stumbled in the Senate due to objections about sentence reform missing from the proposed legislation.

In other words, the bill will ease rehabilitation efforts for federal prisoners and give judges more discretion when sentencing nonviolent offenders, particularly for drug offenses.

Trump noted during his comments at the White House that the bill contains "incentives" to encourage inmates to participate in training and faith-based programs "that reduce their chances of going back to prison substantially."

The president noted that the First Step Act "rolls back parts of [US President Bill] Clinton's crime law… that disproportionately" harmed African-Americans.

The bill began life as the Prison Reform and Redemption Act, produced in January by a collaboration between White House adviser Jared Kushner and #cut50, a bipartisan criminal justice reform organization founded by CNN's Van Jones and attorney Jessica Jackson Sloan and being more recently championed by Kim Kardashian West. West's visit to White House in May to lobby the president also resulted in the pardoning of Alice Marie Johnson, a 63-year-old who was serving a life sentence for a non-violent drug conviction, Rolling Stone noted.

The final version of the bill has wide bipartisan support, with endorsers including the American Civil Liberties Union (ACLU), the Koch brothers, seven law enforcement agencies, and a list of over 50 celebrities, Rolling Stone reported Wednesday.

"I am proud to stand with this incredible group of artists, content creators, and athletes in urging Congress to pass the First Step Act," Jones told the publication. "Who would have thought that a plan to give incarcerated people a better chance would unite people in both parties and at all levels of society?"

"I'll be waiting with my pen," Trump said, urging the Senate to pass the bill. "It's the right thing to do."