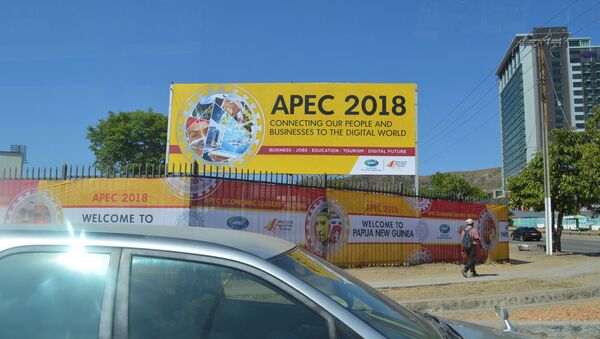 Denis Bolotsky
All materialsWrite to the author
The Pacific island nation of Papua New Guinea is hosting major APEC events this week, including the annual Leaders' Summit. The country's minister of lands, Physical Planning and APEC 2018, Justin Tkatchenko, shared his views on the impact of the summit in an exclusive interview with Sputnik.

Sputnik: This is the first time Papua New Guinea is hosting such a large international event. Could you tell us how it has affected your country, and what do you expect to gain from hosting APEC?

Justin Tkatchenko: This is a major event not only for our prosperity now and into the future, but also to get our country exposed to the rest of the world, to say that we're not part of Africa. We're a Pacific island nation, which is the biggest in the region, with a population of around 8 million people, with so much prosperity to look forward to now and in the future as well when it comes to money, infrastructural development, economic potential, tourism — you name it.

Justin Tkatchenko, Papua New Guinea’s APEC minister, is certain, that money spent on hosting the event will be returned as long-term investments, which could be spent domestically on priority programs, such as free education, free medicine and health care. pic.twitter.com/s0xai4huMb

APEC has got so much, APEC offers so much that we can use it as a stepping stone to do bigger and better things in the future. So, we use APEC to our advantage, selling our products — oil and gas, talking and negotiating with other countries to get the best price to buy our unique natural products. And then, from there [we] also look at the opportunities of countries coming to Papua New Guinea to invest, and to make their place here home.

Sputnik: In terms of numbers, how soon are you planning to get back the money your country spent on organizing the APEC events?

Justin Tkatchenko: Well, when you look at it, we would have roughly spent, once everything is completed, around 250 million US dollars, which is really not much when you compare it to the long-term investment and prosperity that the country will gain out of APEC. The media coverage that we will get alone — you can't buy that. Having 800 media people here promoting APEC, promoting Port Moresby, promoting our country — trying to pay for that to spread throughout the world costs millions as well. So, that all comes free. And then you've got the issue of all future projects coming up with America and all the "the Big Five" countries — that will be announced here at APEC and after as well.

The govt of Papua New Guinea received a lot of criticism as British daily mainstream newspaper broke a story about 40 luxury Maseratis purchased to transport APEC delegates. Govt officials said the state only made a deposit, and that the cars will be paid for by private companies https://t.co/mkZu8NlfsC

So, this investment that the government of Papua New Guinea has put in, though criticized, will leave a lasting legacy now and in the future. I don't expect it to happen overnight, but there are many projects, many interests and many investors ready to put their money where their mouth is. These things take time, of course — we have to go through the proper process, and other things like that to make them work on both sides of the fence. But I'd say that now and over the course of the next 10 to 15 years we'll see the outcome of APEC 2018.

Sputnik: What kind of pressing issues and priorities are there domestically that you're planning to tackle using the money that you'll receive from APEC-related projects?

Justin Tkatchenko: Our government has a free education policy, where all children in Papua New Guinea get free education — the government pays for that. We also have a free health plan, where Papua New Guineans can access free health care and medicine from our clinics. Some of these distribution issues with health and medicine is a challenge in our remote country, and wilderness, and logistics are very difficult. So we have to overcome these challenges in our country.

In Port Moresby you see a polarized society: new roads and govt buildings, and many poor homes in the outskirts. Papua New Guinea itself is far from the “digital economy” being built by APEC, but the event, if used properly, may the Pacific nation to get onto the right track. pic.twitter.com/amF6OELY0f

Every country has its issues. Education is building up the capacity of our teachers to make sure that they can teach our children at the internationally correct education level; providing better services, school classrooms for the kids so they can be taught in a safe, clean and healthy environment. If you have an educated society — everything else falls in line. So, our main objective is to ensure that we concentrate on education, which we have been doing over the last five years. We just have to make it bigger, and better and smarter. From there you look at health. To have a healthy society — is to have a productive society.

Papua New Guinea’s rich culture is the first thing you experience at the summit. Singers and dancers wearing local tribal costumes greet all guests at the APEC venue. pic.twitter.com/TSJBCqu9Ey

But then you also look at other amazing business opportunities, like tourism.  We have a huge tourism opportunity here. We have to set up proper infrastructure and development, and hotels, and products that Russians, Australians, Americans and the rest can embrace. We have more unique culture and traditions here than any other country in the world — 700 languages and 1,000 tribes.

Papua New Guinea is a great country for tourism. But there is a lack of world-class hotels, roads and infrastructure. This hotel in Port Moresby is one of the few places, which was able to accommodate APEC delegates and media. The rest had to book cabins aboard 2 cruise ships. pic.twitter.com/QDHIhyrlRo

Russia Prepared to Share Digital Economy Know-How With APEC - Top APEC Official
We'd beat Fiji hands-down, but Fiji has done it well, because they've got one culture, one language; it's easier for them, and they've created a lovely investment environment for everybody to invest and build their magnificent hotels. So, we've got to take that and use it for our advantage, and plan it out properly here. Slowly but surely we will do that.

Sputnik: When it comes to tourism, many foreign visitors are probably afraid to come here because of safety concerns, and because of the crime. Additional security forces were deployed from other nations to protect APEC delegates during the summit. For many years Port Moresby was notorious for its crime rate. Are you planning to tackle these issues, and if so — how?

Justin Tkatchenko: There is more crime in Australia than there is in Papua New Guinea. I think we overreacted. Yes, we are a developing country. But just look what happened the other day in Melbourne: a mad terrorist lunatic went around stabbing and killing innocent Australian people. We don't get that here, we haven't got that issue here. We are a Christian country, we don't tolerate that sort of rubbish. You've got to put hard lines when it comes to law and order. We can deal with our own people without any issue at all, but it's about outsiders coming in, that cause the problems. So, yes, there are our own domestic law and order issues, but nothing that will affect investment in Papua New Guinea, and that can be managed.