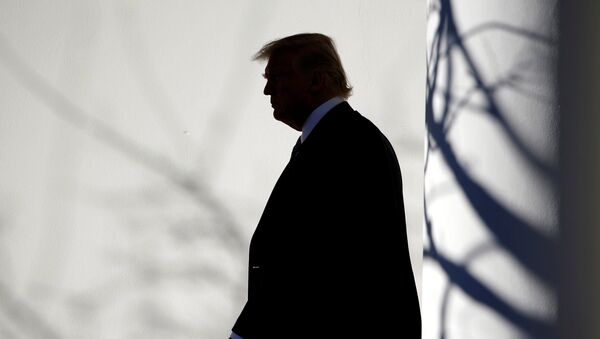 © REUTERS / Joshua Roberts
Subscribe
International
India
Africa
WASHINGTON (Sputnik) - The Democrats won the House of Representatives in the midterm elections, but there is no sign that the results position them better to face President Donald Trump who has indicated he will be more aggressive than ever, analysts told Sputnik.

The Democrats in Congress remain disorganized and are deeply divided on the leaders and policies with which to seek the presidency in 2020, while Trump, although battered by the results of Tuesday's elections, remains undaunted and is prepared to go back on the attack, the analysts commented.

As of Friday afternoon, the Democrats led Republicans in the House by 225 seats to 197, a majority of 28 seats that is expected to grow as more West Coast results are declared. In the Senate the Republicans retain control with 51 seats to 46 and three more results in closely contested races still to be resolved.

University of Pittsburgh Professor of Politics Michael Brenner cautioned that although the Democrats had been victorious, they risked being too complacent and were not prepared for the energetic ruthlessness Trump and the Republicans were likely to show in efforts to block their agenda.

Mixed US Midterms Results Offer Chance for Peace Agenda With Russia, China
"One of the unknowns remains the effectiveness of the Democratic Party as an organized opposition. In this, they are still totally outclassed by the Republicans. In fact, winning the House may well lull to sleep the party establishment," Brenner said.

Democratic leaders might now assume that all they have to do is passively benefit from the negative reaction to Trump, Brenner warned.

Also, many congressional Democrats were likely to be distracted by dreams of pushing their personal presidential ambitions for 2020 while neglecting the hard work of coordinating to advance issues and legislation, Brenner observed.

Regaining control of the House of the Representatives for the first time since 2010 "will encourage every Democrat who ever dreamt of being President as a kid to seek the nomination. At this point, there is no viable candidate [for 2020] on the horizon," Brenner said.

By contrast, the Republicans were likely to remain focused on the core issues of advancing their party’s own partisan interests, he pointed out.

Despite Dem House Majority, Trump Wins Midterms Thanks to ‘Blue Wave’ Failure
"The Republicans will see this as a speed bump on the road to consolidating their dominance of the government and the country," Brenner said.

The Republicans would have to recognize that their legislative agenda would be blocked, at least for the moment in the House of Representatives, Brenner acknowledged.

"The proposed next round of tax cuts for corporations and the wealthy will be the first casualty," Brenner said.

However, the Republicans still retained control of the executive branch of the federal government and would use that power to energetically advance their agenda, Brenner explained.

"We should remember… that none of the on-going changes in the executive departments, like those involving drastic deregulation, will be affected," Brenner said.

Nor would the election outcome affect the hawkish, aggressive nature of the Trump administration’s foreign and national security policies, Brenner advised.

"On foreign policy, it is striking that not a single outstanding issue figured in the election. Hence, there will be no serious challenge to the current thrust of Trump policies," he said.

US Policy Unlikely to Change After Midterm Elections - Moody's
Therefore established pattern would continue with Trump expressing bellicosity, confronting Russia, Iran, China and anybody else who disobeys Washington; following the Israeli line in the Middle East and undercutting international treaties and organizations, Brenner predicted.

"The one exception may be Saudi Arabia, where the move in Congress to sanction Riyadh for it humanitarian abuses by curbing arms sales could be accelerated," Brenner said.

However, the White House probably would succeed in leaning on the Republican leadership in the Senate to block any such move, Brenner added.

Author and political commentator, Dan Lazare, agreed that the divided Congress would not mellow Trump but provoke him to become even more aggressive in his rhetoric and policies.

"I think it's a return to the old gridlock wars, only this time even more ferocious… He [Trump] is bloody, but unbowed and all the angrier and more aggressive as a consequence," Lazare said.

While the Democrats have conquered the House of Representatives, Republicans have strengthened their grip on the Senate, Lazare noted.

'Senate Under Republican Control': Trump's Foreign Policy Unstoppable - Analyst
"This means that Trump can still claim some measure of vindication. More or less the same holds for the judiciary: thanks to the Republicans' Senate victory, it's more of a GOP [Republican] fief than ever," Lazare said.

The Republican-appointed majority on the US Supreme Court bolstered by Trump’s two appointments of Justices Neil Gorsuch and Brett Kavanaugh would now signal that gerrymandering and voter suppression could continue unabated as Democratic fury continues to mount, Lazare concluded.