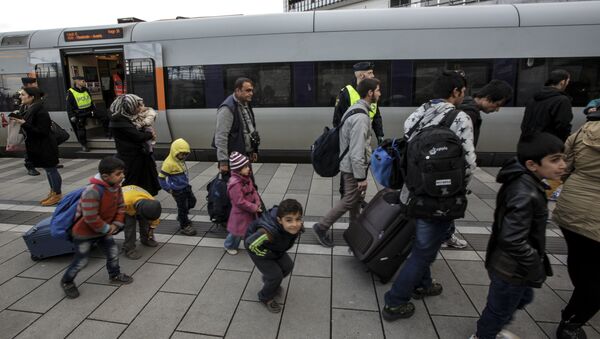 © AFP 2021 / TT NEWS AGENCY / STIG-AKE JONSSON
Subscribe
If accepted, this step may give hundreds of thousands of immigrants and adolescents a say in Swedish politics.

A bill presented in the Swedish parliament by nine Left Party members proposes extending full voting rights to immigrants who lack Swedish citizenship. This step would allow them to vote in parliamentary elections, as well as referendums and even EU elections.

The Left Party argued that voting and choosing their representatives through elections is a fundamental right in a democracy. In the bill, the Left Party members argue that foreign-born residents of Sweden who currently lack Swedish citizenship should also be able to influence the governance of the constitutional monarchy. Enhanced voting rights, they argue, would give immigrants a "greater sense of participation, togetherness and increased self-esteem."

"The residents of Sweden who are currently denied the opportunity to exercise a democratic influence in referendums, parliamentary elections and EU elections include those who came to Sweden as refugees and are spouses of Swedish citizens and those who immigrated to Sweden in order to study or work," the bill said, calling for equal voting opportunities for all Swedish residents.

At present, people without Swedish citizenship are allowed to vote in municipal elections, a procedure the Left Party wants to be applicable to all other elections in Sweden.

In another step to broaden the voting rights, the Left Party wants to reduce the age threshold in city council elections to 16 years, citing positive experiences in countries like Germany, Austria and Norway. "At 16, you're old enough to get penalized, so you should be allowed to vote," Mia Sydow Mölleby, one of the bill's sponsors, said.

"A reduced voting age can revitalize democracy and give more people the opportunity to engage in democratic procedures," the bill said.

In 2011, 650,000 Swedish residents had foreign citizenship, a number likely to have increased following the migrant crisis of 2015, when tens of thousands of people entered Sweden as asylum seekers.

When challenged by the news outlet Nyheter24, which presented a "what if" scenario in which "a million Russians arrive and would like to vote," Sydow Mölleby dismissed this perspective as unlikely due to the Migration Board's good work.

The Left Party is a socialist and feminist political party. The party originated as a split from the Social Democrats Party in 1917 and was known as the Communist Party of Sweden between 1921 and 1990. Although never part of the government per se, the party has frequently collaborated with the red-green governments of the recent decades. In the 2018 election, the party garnered 8 percent of the vote.

000000
Popular comments
the swedes are really off the rails. if this passes the russians should move in en masse and skew the elections in their favor or maybe the danes or maybe the norwegians. the germans could take over the country in a matter of a few short years. lol