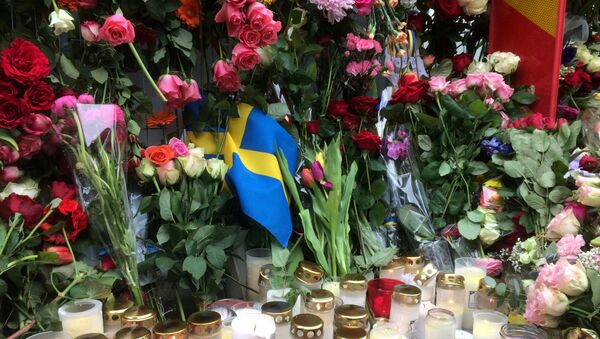 The grave of a young Swedish girl murdered in the Stockholm truck attack, perpetrated by illegal immigrant Rakhmat Akilov, has been defaced several times by another illegal immigrant whom the Swedish authorities have been unable to expel, the 11-year-old's livid father claimed.

Over the past year, the grave of 11-year-old Ebba Åkerlund, one of the victims of the Stockholm truck attack in April 2017, has been defiled about 30 times, the magazine Samtiden reported.

After the police proved unable to arrest anyone for this crime, Ebba's father, Stefan Åkerlund took the matters into own hands to stop the desecration. By his own admission, he guarded the graveyard at night until he finally caught the perpetrator red-handed. However, despite being detained by the police, the man was released without further action.

"I personally caught him in the act of desecration, when he was pouring stearin on Ebba's grave; the police released him after only one hour in custody," Stefan Åkerlund wrote on his Facebook page, sarcastically praising the police for "good work." "That's what my nightly visits to the graveyard were worth."

According to Stefan Åkerlund, the man violating his daughter's grave is an illegal alien whom the authorities cannot expel.

"How can a person condemned to expulsion and barred from Sweden until 2019-02-27 have never even left the country in the first place?" Åkerlund asked rhetorically, stressing that the man in question was taken to the police several times, while facing a year's imprisonment for staying in Sweden illegally.

According to Åkerlund, the man also vandalized other graves at the same cemetery, including that of Swedish Prime Minister Olof Palme, whose murder in 1986 remains unsolved as of today.

"Since late March, he's damaged Isabell's tomb at Ebba's cemetery so badly that her mother had to replace the headstone. About six weeks ago, Olof Palme's headstone was totally destroyed by stearin that won't come off. Ebba's tomb has been desecrated over 30 times," Åkerlund wrote.

Åkerlund lost his daughter in the Stockholm truck attack in 2017, when fundamentalist Muslim illegal immigrant Rakhmat Akilov plowed a truck into a crowd of pedestrians. He has spared no words in his criticism of the Swedish government, which he holds responsible for her death.

"A headless immigration policy and authorities that did not do their job led to my daughter's death, and my own life is ruined forever," Åkerlund wrote in an opinion piece in the daily newspaper Expressen, calling for an independent commission to investigate the terrorist attack on Drottningsgatan.

"What happened to the wonderful Sweden that I once grew up in?" Åkerlund asked rhetorically on Facebook.

Åkerlund's piercing Facebook post became of the most-shared in Sweden, with dozens of Swedes expressing their condolences and sympathy for the bereaved, as well as indignation over the repeated acts of vandalism.