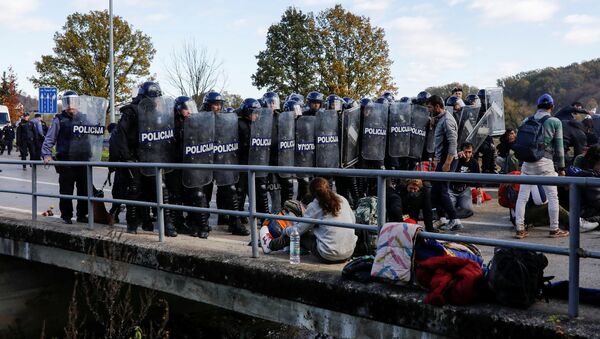 The planned breakthrough will reportedly take place ahead of signing a proposed UN Global Compact for Safe, Orderly and Regular Migration pact. Several countries such as the US and Austria have already backed out of the treaty.

Some 20,000 migrants are currently preparing to break through the Bosnian-Croatian border near Velika-Kladusa, Kronen Zeitung reported, citing an anonymous department head from the Austrian Interior Ministry. The migrant crowd is purportedly made up of young men of Pakistani, Iranian, Algerian and Moroccan descent as opposed to earlier migrant "waves" from Syria. And there are almost no women in this group.

But what troubles the Interior Ministry most are the reports that many of these men are armed with knives. Media outlets have already reported one incident, involving a border officer who was attacked by knife-wielding migrant.

The Interior Ministry is not worried about the massive migrant group coming to Austria because most of them want to reach the northern part of the EU, where states provide better conditions for refugees.

"Migrants want to [go to] Germany, to Scandinavian countries. Austria is not the best option for them right now," the source in the ministry said.

The growing crisis at the Bosnian-Croatian border comes a month ahead of a UN conference in Morocco, where The Global Compact for Safe, Orderly and Regular Migration will be adopted. The pact is described as a framework to maximize the benefits and minimize the risks of migration. Despite the agreement's stated goal, a number of states, namely the US, Croatia, Hungary, Austria, have backed out of the pact, while several others are weighing this option.

In October, Austrian Chancellor Sebastian Kurz criticized some of the clauses of the proposed agreement due to substantive concerns over threats to the country's sovereignty. Kurz is known for his hardline stance on illegal migration. In one of his most recent proposals, the chancellor suggested that the EU should send migrants rescued at sea to countries outside the bloc's borders.