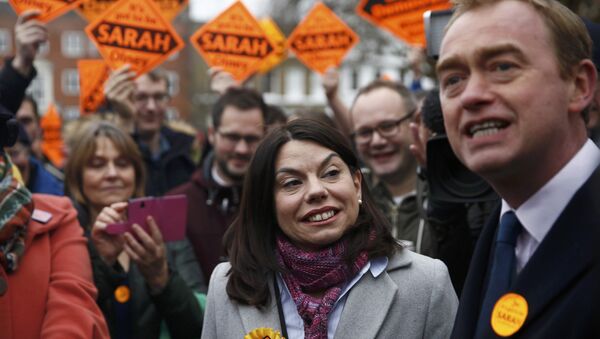 © REUTERS / Peter Nicholls
Subscribe
Liberal Democrat staff are facing significant redundancies as the party has plunged into a funding crisis, BuzzFeed has reported.

At a staff meeting in the Lib Dems' Westminster HQ October 31, staff were told around 20 redundancies would need to be made — as the party employs approximately 60 staff, with another 20 working in the field, in total around 25 percent of the party's total workforce are to be cut.

Redundancies are voluntary for the time being, but will be compulsory in the event of limited take-up — the mass defenestration is motivated by a gaping hole in the party's finances, amounting to several hundred thousand pounds.

A Liberal Democrat spokesperson confirmed to BuzzFeed significant layoffs are in the offing. 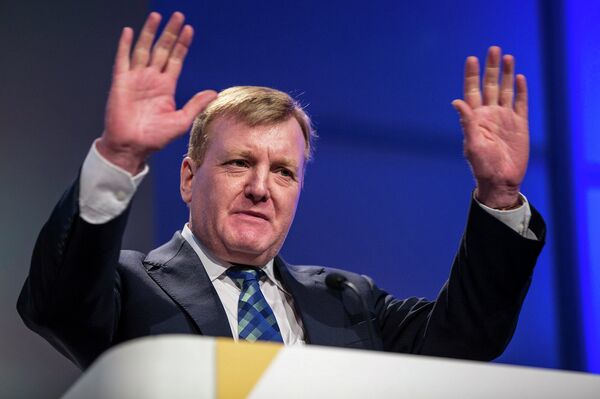 UK Former leader of the Liberal Democrats Charles Kennedy
© Flickr / Liberal Democrats
"We are in the process of carrying out a reorganisation which will see a reduction in the number of staff at our headquarters. We are focussing our resources to carry on leading the fight against Brexit and taking on power and privilege to build a country where everyone has the opportunity to succeed. Since gaining seats in last year's General Election the Liberal Democrats have been winning seats in council by-elections across the country and are leading the fight to stop Brexit through a People's Vote," they said.

A decade ago, the Liberal Democrats stood at over 20 percent in the polls, but today, the party rarely achieves double figures. Their precipitous decline is inextricably linked to the five years spent in coalition with the Conservatives (2010 — 2015), which saw then-leader Nick Clegg become Deputy Prime Minister, and other Liberal Democrats elevated to the cabinet.

After joining, the party's poll ratings fell dramatically, particularly following the government's support for raising the cap on tuition fees. On December 8 2010, when parliament was preparing to vote on raising tuition fees to £9,000 (US$11,680), a YouGov opinion poll recorded voting intention figures of Conservatives 41 percent, Labour 41 percent, Liberal Democrats percent — the lowest level of support recorded for the Liberal Democrats in any opinion poll since September 1990.

In a by-election in the South Yorkshire constituency of Barnsley March 2011, the Liberal Democrats fell from second place at the general election to sixth, with their candidate losing his deposit. In council elections held May 2011, the party suffered heavy defeats in the Midlands, North and Scotland, and lost heavily in the Welsh assembly and Scottish Parliament, where several candidates lost their deposits. 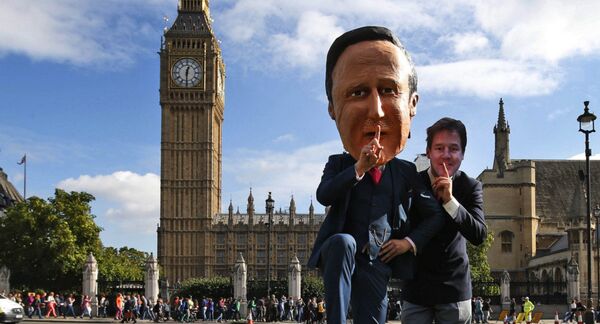 In June 2012 it was reported membership of the party had fallen by around 20 percent — in September that year Clegg published a video in which he perosnally apologised for breaking his tuition fees pledge. Of the 18 by-elections held during the 2010-15 Parliament, the party lost its deposit in 11 — in the November 2015 Rochester and Strood by-election, the Lib Dems came fifth, with 349 — 0.9% of votes cast. This was both the worst result in the history of the party, and of any governing party, in history.

In the May 2014 local elections, the Liberal Democrats lost 307 council seats, and 10 of their European Parliament seats, leaving the party with just one MEP.

In the 2015 General Election, the party experienced its worst-ever showing, losing 48 seats in the House of Commons, which left them with only eight MPs. Prominent MPs who lost their seats included former leader Charles Kennedy, former deputy leaders Vince Cable and Simon Hughes, and several cabinet ministers.