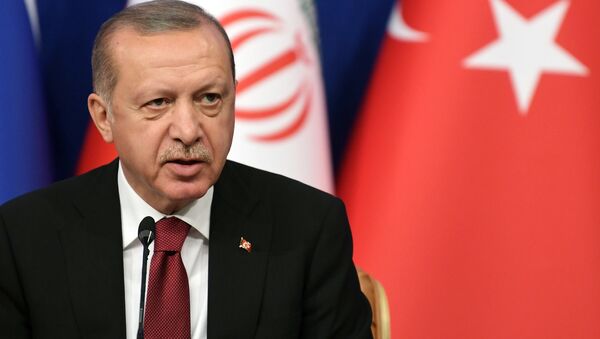 © Sputnik / Sergei Guneev
/
Go to the mediabank
Subscribe
International
India
Africa
Turkish President Recep Tayyip Erdogan said Friday in a Washington Post op-ed that "we know that the order to kill [Jamal] Khashoggi came from the highest levels of the Saudi government."

"I do not believe for a second that King Salman, the custodian of the holy mosques, ordered the hit on Khashoggi," the Turkish president wrote Friday in the Post, a publication to which Saudi journalist Khashoggi contributed before he was killed in early October in Istanbul.

Erdogan stressed that in light of this, there was "no reason to believe that his murder reflected Saudi Arabia's official policy," so "it would be wrong to view the Khashoggi slaying as a 'problem' between two countries."

However, he also made clear that the friendship between Saudi Arabia and Turkey "doesn't mean we will turn a blind eye to the premeditated murder that unfolded in front of our very eyes."

Erdogan slammed the Saudi investigation thus far, noting "the efforts of certain Saudi officials to cover up Khashoggi's premeditated murder rather than serve the cause of justice."

"Though Riyadh has detained 18 suspects, it is deeply concerning that no action has been taken against the Saudi consul general, who lied through his teeth to the media and fled Turkey shortly afterward," Erdogan's op-ed continues. "Likewise, the refusal of the Saudi public prosecutor — who recently visited his counterpart in Istanbul — to cooperate with the investigation and answer even simple questions is very frustrating. His invitation for Turkish investigators to Saudi Arabia for more talks about the case felt like a desperate and deliberate stalling tactic."

Khashoggi was killed on October 2 inside the Saudi consulate in Istanbul, where he had gone to obtain necessary papers for his upcoming wedding. While the Saudis have denied ordering his death, they acknowledge that the journalist, who fled the country last year, died in an altercation with several men inside the consulate building, an incident Saudi Foreign Minister Adel al-Jubeir described as a "rogue operation." The Turkish government, however, maintains that Khashoggi was assassinated by a hit squad sent from Saudi Arabia specifically for the task.

The Saudi public prosecutor found last week, however, that Khashoggi's murder had been orchestrated in advance.

Earlier this week, Turkish public prosecutor Irfan Fidan said in a statement that Khashoggi was "strangled as soon as he entered the consulate" in line with "premeditated plans… After being strangled, [Khashoggi's body] was subsequently destroyed by being dismembered, once again confirming the planning of the murder," he continued.