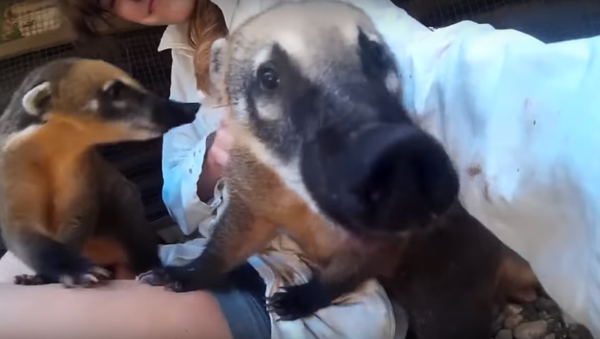 © YouTube/Rumble Viral
Subscribe
Cuddling with you one second, clawing into you the next!

The coati, a member of the raccoon family, is both peculiar and precious to observe, but one family learned the hard way that their quirky nature gets old fast if the South American native is domesticated.

According to the footage owner, the two coatis were purchased "legally" while the mammals were still young. Despite good intentions, the family's headache reportedly grew alongside the coatis, prompting the family to give the pair away to a sanctuary.

The Rumble Viral clip, posted October 26, shows the mischievous duo using their slender snouts to root through their caretaker's lab coat. While the encounter appears snuggle-esque in the beginning, the video comes to an end shortly after one coati is seen biting an item inside the worker's pocket.