Trump: US Is Going To Hold Migrants in ‘Tent Cities’ Until Trials Take Place 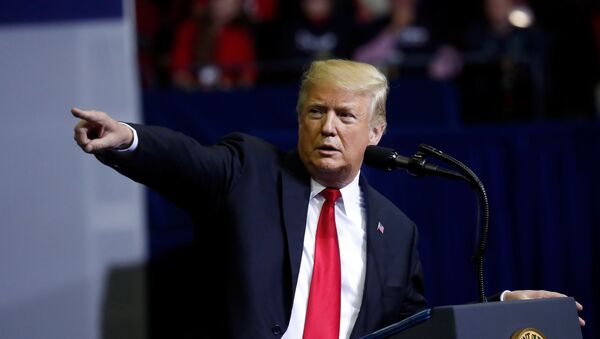 During a Monday interview, US President Donald Trump said the US administration is planning to “build tent cities” for would-be immigrants from the migrant caravan currently traversing Mexico, en route from Central America.

Trump, who tweeted recently that there are “Gang Members and some very bad people” in the caravan of more than 5,000 people reportedly fleeing Honduras, Guatemala and El Salvador, was interviewed by Fox News. He said his administration will “hold” the migrants who apply for asylum rather than releasing them pending their court dates, as previous administrations have done.

.@POTUS on facilities for asylum seekers: "We’re going to build tent cities. We’re going to put tents up all over the place." @IngrahamAngle pic.twitter.com/fL3ALkNbz4

“If they applied for asylum, we’re going to hold them until such time as their trial takes place,” Trump said.

Asked where these tent cities will be placed, Trump said that they will be placed “all over the place,” adding “we’re not going to build structures and spend all of this, you know, hundreds of millions of dollars —we’re going to have tents.”

“They're going to be very nice,” the US President pointed out.

Earlier Trump called the migrant caravan an “invasion” and referred to the November midterm election as the “caravan” election.

VP Pence Says Migrant Caravan 'Funded From Outside,' Organized by Leftist Forces
He also commented on former president Barack Obama’s words that Trump’s rhetoric escalates xenophobia and a racist image of immigrants ahead of Election Day.

“I think I've been toned down if you want to know the truth. I could really tone it up because, as you know, the media's been extremely unfair to me and to the Republican Party,” Trump said.

Earlier on Monday, Trump ordered the deployment of 5,200 active-duty troops to secure the US border with Mexico. The order came after Twitter videos showed a caravan crossing the Mexico-Guatemala border via the Suchiate River.