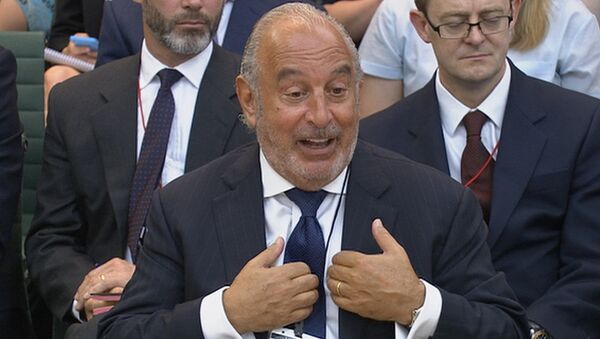 Kit Klarenberg
All materials
Philip Green, the 66-year-old chairman of Arcadia Group, which includes fashion brands Topshop and Dorothy Perkins, has been named as the individual who obtained a privacy injunction to prevent the media publishing incendiary allegations by former employees.

For several months, speculation has rippled throughout social media as to the identity of the "leading businessman" who employed non-disclosure agreements (NDAs) and "substantial payments" to prevent publication of his name in relation to allegations of serious and repeated sexual harassment, racist abuse and bullying.

Speaking in an afternoon debate in the House of Lords October 25, Labour peer Peter Hain said "someone intimately involved in the case" had notified him the individual was Green.

"I feel it's my duty under parliamentary privilege to name Philip Green as the individual in question, given the media have been subjected to an injunction preventing publication of the full details of a story which is clearly in the public interest," he said.

​In a subsequent interview with BBC Two's Newsnight, Hain said he'd received "overwhelming support — particularly from women" for his actions.

"What concerned me about this case was wealth, and power that comes with it, and abuse. And that was what led me to act in the way that I did. There's no point in being in Westminster if you never deploy the precious rights of parliamentary privilege," he added.

On July 16, the Court of Appeal barred the Daily Telegraph from publishing allegations of "discreditable conduct" by five employees against Green — Arcadia Group immediately applied for an injunction when the newspaper requested comment on the story, at a rumored cost of US$640,000 (£500,000).

This injunction was overturned in August by a High Court judge, who said the allegations were "reasonably credible", there was no "reasonable expectation of privacy or confidentiality", most of the information the newspaper wanted to publish was already public domain, and there was a strong "public interest" in publishing them. However, this was in turn overturned by the Court of Appeal in short order.

Worth noting in light of the Presidents Club and Philip Green that the 2013 “bonfire of regulations” by the Conservatives made tackling workplace sexual harassment more difficult. Employers are no longer liable unless they know an employee was harassed on two previous occasions

​The exposure has led to calls for Green to be stripped of his knighthood, bestowed in 2006 "for services to the retail industry" — Liberal Democrat leader Vince Cable said he'd "narrowly and luckily escaped losing his knighthood" over the over the BHS pensions scandal.

The department store chain, bought by Green in 2000 and sold in 2015, went into administration in 2016 with debts of US$1.66 billion (£1.3 billion) and a pensions deficit of US$730 million (£571 million), despite Green collecting US$749 million (£586 million) over the course of his stewardship of the company, which he deposited in a tax haven to avoid paying revenues. Simon Walker, Director General of the Institute of Directors, condemned Green's "lamentable failure of behaviour".

Sir Philip Green the man Tony Blair had knighted. Anyone nostalgic for the Blair years? pic.twitter.com/ARdKGKsjZ2

​On October 20 2016, the House of Commons approved a motion to ask for the Honors Forfeiture Committee to recommend Green's knighthood be "cancelled and annulled" in response to the scandal. In all, 100 MPs voted in favor of the motion, the first time UK legislators have proposed someone be stripped of a knighthood.

I can't of course mention Sir Philip Green's name but i can say that he once furiously terminated an interview with me by physically shoving me into the lift in his office and then holding my crew hostage demanding they hand over the tape of it all: They didn't!

​Since gaining public recognition with the purchase of BHS, Green has frequently been the subject of major controversy. For instance, Arcadia Group — owned in the name of his wife Tina, a Monaco resident for tax purposes — has been criticized for the pay and conditions of both overseas and UK workers by anti-sweatshop groups such as Labour Behind the Label and No Sweat. In 2010 for instance, the company was found to utilize British factories in which workers were paid less than half the national legal minimum wage.

On the day Green was outed, Prime Minister Theresa May told MPs it was "clear" some employers used NDAs "unethically", and the government would look at ways to improve relevant rules, making it "explicit" to companies when they cannot be used.

NDAs are typically employed by businesses in order to protect confidential trade secrets, but have also been exploited by wealthy individuals and organizations to suppress publication of damaging information in the media.

Commodities Giant Trafigura Accused of Abandoning African Toxic Legacy
For example, in 2009 commodity firm Trafigura secured a 'super injunction' blocking mention of a report that concluded the company had dumped toxic waste near the Ivory Coast despite being aware of the dangers, in order to avoid paying a US$1,000 per cubic meter surcharge imposed by Amsterdam Port Services to discourage waste disposal in the Netherlands. In the process, at least 17 people died, 30,000 were seriously injured — some incurring severe skin and lung burns — and over 100,000 were potentially affected.

The suppressed details nonetheless rapidly circulated via social media, and it was eventually lifted — but not before the BBC was threatened with a costly libel suit by Trafigura's lawyers at Carter-Ruck. The state broadcaster buckled to the pressure, removing a detailed investigation from its website, which featured interviews with victims in Cote d'Ivoire and claims the company had brought "ruin" on the country in order to make a "massive profit" — it also issued a public apology, donated over US$30,000 to charity.

Parliamentary privilege means that you can say things which if said outside Parliament would get you sued.
Once it’s said, others can repeat it *with the context that that is where it was said*. (https://t.co/e2GvssHoAm) Anyone remember Trafigura? Anyhow. pic.twitter.com/vCITjHw7Hs

​However, the BBC did not retract further reports, which quoted internal Trafigura emails which showed staff knew the waste was toxic before it was dumped. In one, a Trafigura employee said "this operation is no longer allowed in the European Union, the United States and Singapore" due to "the hazardous nature of the waste'" and another says "environmental agencies do not allow disposal of the toxic caustic".

Similarly, in 2011, Top Gear host Jeremy Clarkson voluntarily lifted a privacy injunction which prevented UK media from reporting claims by his former wife they had an affair after he remarried.

"Injunctions don't work. You take out an injunction against somebody or some organization and immediately news of that injunction and the people involved and the story behind the injunction is in a legal-free world on Twitter and the Internet. It's pointless," he lamented.