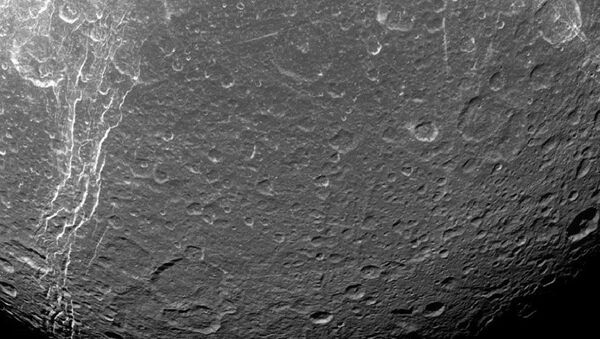 © Photo : JPL-Caltech/Space Science Institute
Subscribe
The incredibly long and narrow virgae may be shaped from material shed by Saturn’s moons, but the question arises if it really is an exogenic source that is responsible for the inexplicable phenomenon.

Puzzling straight bright streaks, running for tens to thousands of kilometers, have been found on one of Saturn’s moons, Dione, a study paper by planetary scientists published in Geophysical Research Letters has stated. However, scientists haven’t yet made head or tail of the mysterious finding.

“They’re just really bizarre,” says study coauthor and planetary scientist Emily Martin of the Smithsonian National Air and Space Museum in Washington, D.C. “It’s really exciting when you see something really strange, and you’re just trying to figure out what the heck it could possibly be.”

Dione’s perfectly linear virgae (“virgae” means “stripes or streaks of color”) are comparatively narrow, less than 5 kilometers in width, and much brighter than the surrounding terrain. The stripes come in parallel lines and are apparently unaffected by the moon’s landscape at large, which suggests they emerged not so long ago on the moon.

The scientists mapped the structures and compared them to straight lines on other celestial bodies, including the Saturnian moon Enceladus, Earth’s moon and Jupiter’s moons Ganymede and Callisto.

It is notably on the ice-crusted moon Enceladus that the most famous stripes in the Saturn system are found. The so-called “tiger stripes” found there are believed to be cracks in the surface that open and close as gravitational pushes and pulls from Saturn and other moons send massive fountains of water upwards.

Dione’s stripes don’t resemble those seen on Earth’s moon either – long linear grooves of diverse width that always follow hills and run down the slopes.

Dione is similarly different from Jupiter’s researched moons, Ganymede and Callisto, and their straight lines of craters, so-called catena, tend to be much shorter and scalloped than Dione’s virgae.

According to one of the paper’s co-authors, Alex Patthoff, Dione’s stripes could probably have been brought from the outside. If the stripes had emerged due to exogenic reasons, that could be “another means to bring new material to Dione.” That material could have implications for the biological potential of Dione's subsurface ocean," he stated. The material is assumed to have arrived from Saturn’s rings, since there is even an expression “ring rain,” which suggests a possibility of such an exchange of materials.

Depending on the origin of the material, the lines “could be pointing to an event in the Saturn system that we hadn’t previously known about,” Martin noted.