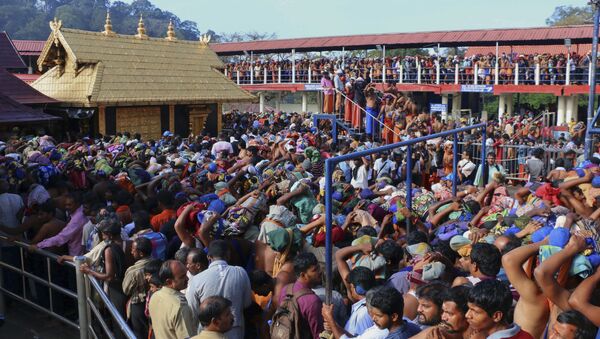 Despite the apex court of India ordering the authorities to allow entry of women inside the temple, the Ayyappa devotees continue to hold the age-old faith that the deity is a celibate and that young women of fertile age should not enter the temple.

With only a few hours to go for the controversial Sabarimala temple in southern India to open its gates for women of all ages, radical elements have unleashed a spate of violent activities, threatening the law and order of Kerala.

Numerous battalions of state police have been deployed in the base camps of Nilakkal, Pampa and Pathanamthitta on the way to the Sabarimala Ayyappa temple, where radical groups, mostly led by women, are stopping young devotees of the fairer sex from proceeding to the temple.

The annual opening of the gates of the Sabarimala temple is scheduled on Wednesday evening.

#Kerala: Famous #Ayyappa temple in #Sabarimala all set to open at 5 pm today, as tension prevails in area. pic.twitter.com/GOJrqyeuSr

The dance has begun. But it's a male-only affair here in Erumeli even as sporadic, unconfirmed reports of violence stream in from Nilackal, the base camp @IndianExpress #Sabarimala pic.twitter.com/dnxCcRiNqA

Protesters were seen holding mammoth marches and some were spotted checking buses on route to Sabarimala to forcefully stop women from going to the temple.

The peaceful procession of agitators from kottarakkara in kerala protesting agnst the court order on sabarimala as also the pinarayi govts obstinacy in hurriedly trying 2enforce the order despite seeing the surge of protest which no mal channel or paper is giving wide coverage. pic.twitter.com/ydbOpWd8rp

A team of journalists of The News Minute news portal led by its editor, Dhanya Rajendran, was attacked by the radical groups. She took to Twitter to flash the news while many users abused her online in response to her tweet for attempting to go to Sabarimala.

The REAL face of religious bigotry and Male supremacy….. keep pretending to be all holy and pious but in reality attack,
Molest, bully, threaten and beat innocents…. LAW AND ORDER SEEMS TO BE DEAD IN SABRIMALA.. Bullies rule!! pic.twitter.com/KowqzoGJHc

Oooohhhhh Arnab Vs Sabrimala… Bhakts now spinning in circles… what do they do? Arnab? Or Sabrimala? Arnab or RW religious fanaticism…. on opposite sides now suddenly for the first time…. what is going to happen? Bhakts spinning round n round n round pic.twitter.com/ae95facXRh

Several public figures in India have expressed their dismay and worry over hooliganism and force used by the radical groups in stopping the women despite a court order in their favor.

Those opposing women’s entry in Sabarimala are taking India backwards. If British can abolish Sati, why cant independent India do away with this idiotic practice?

It has happened for the 1st time in the world, it's amusing. 'Make me a slave,treat me unequally,we're inferior to men'; women are stopping women. What's the point in this. I don't know what's happening in this nation. It's my personal opinion, not political: Udit Raj.#Sabarimala pic.twitter.com/o5pWFtnO6V

The leader of the opposition in Kerala's legislative assembly, Ramesh Chennithala, has called for peace and a resolution of the issue without violence.

"We would be holding mass meetings to make the people aware of the condition. Government's inadequacy is helping the radical group take advantage of the situation," Ramesh Chennithala told Sputnik.

The Sabarimala temple in the southern state of Kerala in India has been the cause of tension ever since a few public interest litigants filed a petition challenging the ban on the entry of adult women into the temple.

Last month, the apex court ruled in favor of the litigants and asked the state government to take steps to implement the order.