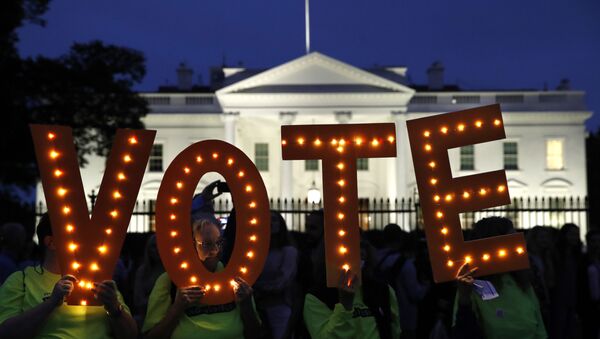 MOSCOW (Sputnik) - Russia has offered the United States to make written commitments about non-interference in each other's affairs as Moscow is ready to give such guarantees "at any time," but Washington has shown no such desire, Georgy Borisenko, the head of the Russian Foreign Ministry's Department of North America, told Sputnik.

"Now we are proposing to exchange letters of more or less the same content, for example, between the foreign ministers of Russia and the United States. Unfortunately, Washington is stubbornly ignoring it, they are just categorically rejecting it," Georgy Borisenko noted.

The Russian diplomat said that Moscow had "repeatedly offered to make written commitments on non-interference in each other's internal affairs with the US."

"At the same time, we have pointed out that it is possible to use the experience of restoring diplomatic relations between our countries in 1933. Then the USSR People's Commissar for Foreign Affairs Maxim Litvinov and US President Franklin Roosevelt exchanged personal notes, which contained a commitment not to infringe upon each other's internal affairs. What is interesting is that it was the US authorities who insisted on it, because they were very afraid of Soviet influence during the Great Depression," Borisenko explained.

According to the official, Moscow made a similar proposal to Washington in June, even before the summit in Helsinki.

"We sent a draft of such a letter to our US colleagues so that they could consider it. The United States rejected it… We are ready to give them written guarantees at any time, but the US shows no such desire," Borisenko said.

Facebook Bans Russia-Linked Social Media Firm for 'Scraping' of Users' Data
The United States has repeatedly accused Russia of interference in the 2016 presidential election and is investigating Trump's team members' alleged links to the Kremlin.

Russia, for its part, has refuted all the accusations, calling such claims groundless.

Russia Never Planned to Interfere in US Midterms

Russia has never tampered in US elections and is not going to, Georgy Borisenko, the head of the Russian Foreign Ministry's Department of North America, told Sputnik.

"Our side has repeatedly said that Russia has never meddled, is not meddling and has no plans to meddle in US elections. We regard the electoral process [in the US] as something that only the US people should have a say in. Interfering in other countries' affairs is what the US does," he said.

The United States will go to the polls on November 6.

Moscow is ready to discuss the possibility of arranging another summit between Russian President Vladimir Putin and his US counterpart Donald Trump if the White House is interested in continuing top-level dialogue, the Russian Foreign Ministry's Department of North America head Georgy Borisenko told Sputnik in an interview.

"We are surely open to discussions on the whole spectrum of bilateral relations with Washington. If the US is interested in continuing dialogue, and President Trump seems to have demonstrated such interest, we will see when and how it can be done," the official said.

Answering a question on whether the two leaders will meet on November 11 in Paris during events marking the 100th anniversary of the end of World War I, the official said that contact was possible, but no requests for a meeting had been received from the US so far.

Putin and Trump held their first full-fledged summit in the Finnish capital of Helsinki on July 16.