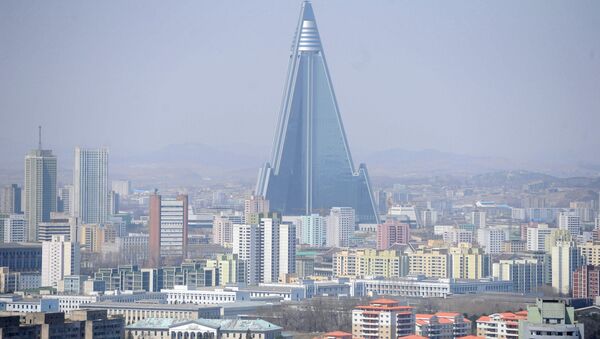 MOSCOW (Sputnik) – North Korean leader Kim Jong-un and Russian President Vladimir Putin have sent each other messages marking the 70th anniversary of the establishment of diplomatic ties between Pyongyang and Moscow, media reported on Friday.

Kim had said that relations between Pyongyang and Moscow had developed on the basis of the "principle of mutual respect, good neighborliness and mutual benefits," the South Korean Yonhap news agency reported, citing an official message carried by the North Korean state-run KCNA news agency.

Putin Ready to Meet Kim in Near Future, Discuss Trilateral Projects - Reports
The North Korean leader also expressed hope that the ties between the two countries would develop in line with the interests of the peoples of Russia and North Korea.

"For the past decades the Russian Federation and [North Korea] have accumulated lots of experience in the course of constructive cooperation in various fields," Putin said in his message, as quoted by Yonhap.

Kim Wants to Foster Strategic Relations With Russia – North Korean Envoy
The Russian president also expressed hope that Moscow and Pyongyang would continue strengthening their relations, including a trilateral program with Seoul, which will help increase stability on the Korean Peninsula.

Putin’s message, however, did not elaborate on the details of the joint program between North Korea, Russia and South Korea.

The Soviet Union was the first state to recognize North Korea on October 12, 1948.