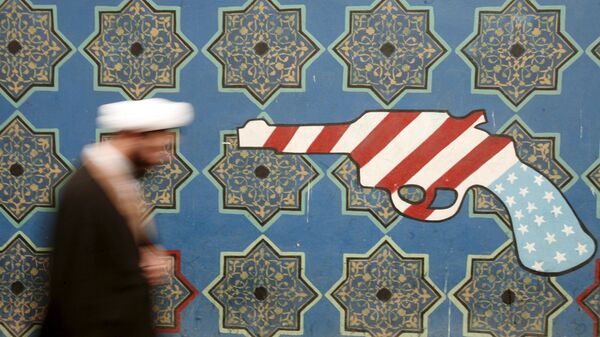 Since the 1979 Islamic revolution in Iran, the United States has been using separatism, assassinations and sanctions to bring about a regime change in Tehran, Iran’s deputy foreign minister said.

Gholamhossein Dehqani, Iran’s Deputy Foreign Minister for Legal and International Affairs, has slammed the US for allowing terrorists to freely live and operate on its territory.

"Today, the terrorists easily live in the US. The US names Iran, which has always been at war against ISIL [Daesh] and al-Qaeda in recent years, a sponsor of terrorist groups but it gives permission to the terrorists to stage rallies against Iran [in the US]," Fars News quoted Dehqani as telling a meeting in Tehran on Wednesday.

He added that since the 1979 revolution, the Washington has been using separatism, assassinations and sanctions to bring about a regime change in Tehran, but all those efforts have fallen flat.

Iran's Revolutionary Guards Vow 'Deadly' Vengeance Against Terrorists - Report
According to Dehqani, Washington has in recent years attempted to use terrorist groups, notably the Mojahedin-e Khalq Organization (MKO, also known as the MEK, PMOI and NCRI), to destabilize the situation in Iran.

Founded in 1960, the MKO blends elements of Islamism and Stalinism and even participated in the overthrow of the US-backed Shah of Iran in 1979.

Ahead of the revolution, the MKO conducted attacks on and assassinations of both Iranian and Western politicians.

It reportedly continued doing this also after the revolution in a bid to take control of the newly-established Islamic Republic. It killed several of Iran's new leaders, including the then President, Mohammad Ali Rajayee, Prime Minister Mohammad Javad Bahonar and Chief Justice Mohammad Hossein Beheshti in 1981, Fars News wrote.

Since the 2003 US-led invasion of Iraq, the group, which now embraces a free-market philosophy, has been strongly backed by neo-cons in the United States, who insisted that the MKO be taken off the US terror list.

The US formally removed the MKO from its list of terror organizations in September 2012, thus unfreezing the group’s assets in the US and allowing it to do business with American companies.

Since last year, a slew of US politicians, among them former FBI director Louis J. Freeh, US Senator John McCain (who addressed a MKO conference), and Senators Thom Tillis, Roy Blunt, and John Cornyn have visited the MKO’s headquarters in Albania, the agency wrote.

In June 2018 US National Security Adviser John Bolton reportedly received $40,000 to attend one of the group’s gatherings in Paris.

During his address, he said that new US President Donald Trump is fully opposed to the "regime in Tehran."

“The outcome of the president’s policy review should be to determine that the Ayatollah Khomeini’s 1979 revolution will not last until its 40th birthday,” Bolton said as quoted by the Washington Times.