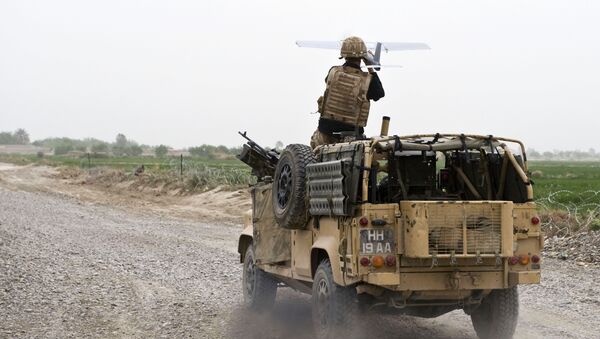 MOSCOW (Sputnik) - The United Kingdom is preparing to combat countries with more powerful armed forces, including Russia, via unmanned flying drones during its Saif Sareea-3 military exercise, The Times newspaper reported on Monday, citing the commander in charge of the UK land forces during the drills.

According to the outlet, the UK-Omani Saif Sareea-3 exercise started in Oman in early October and will last until November 3. During this large-scale drills, qualified as UK "biggest war games," a fleet of drones is being used, each of which costs less then 1,000 pounds ($1,300). The UK Army has never deployed drones during its military exercise before.

"We are trying to put ourselves against those that might be the best equipped, those that might have the best training and those who would give us our toughest challenges," Brig. Zac Stenning, commander of the land forces during the Saif Sareea-3 drills, said, as quoted by the newspaper.

The troops are reportedly going to study the Russian tactical strategies, and then simulate fights with the Russian Armed Forces. They will combat the UK Armed Forces' Household Cavalry lightly-armored vehicles, imagining that these are the Russian T-72 battle tanks.