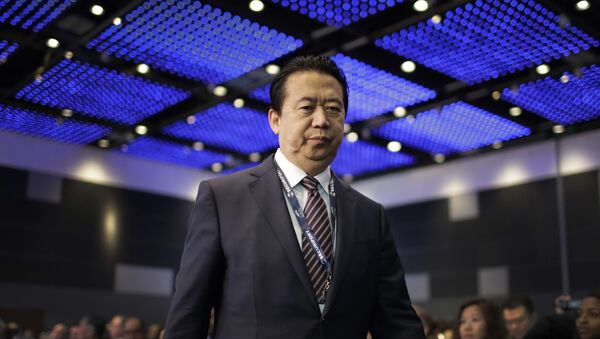 © AP Photo / Wong Maye-E
Subscribe
International
India
Africa
Interpol boss Meng Hongwei hasn't been heard from since Septmber 25, when he travelled from France to China. Hong Kong's South China Morning Post has earlier suggested, citing an unnamed source, that he was being interrogated by Beijing officials.

Interpol has told Euronews that they have officially requested clarification from China on the whereabouts of its President Meng Hongwei.

The wife and children of the missing Interpol president had been placed under special protection by French police after she received threats by phone and via social media, the French Interior Ministry stated on Saturday, adding that they continued to exchange information with Chinese authorities over Meng's disappearance.

The 64-year-old official's wife, who resides in France's Lyon where Interpol is headquartered, reported her husband missing on Friday, having not heard from him since 25 September when he traveled from France to his native China.

A source familiar with the investigation told Reuters the working assumption was that Meng, who also serves as the Chinese deputy public security minister, had been detained as a result of a confrontation with Beijing authorities.

This partly confirms the suspicions of the Hong Kong-based newspaper South China Morning Post (SCMP), which reported on Friday that the official is under investigation in China. According to the SCMP, Meng was taken for interrogation soon after landing in China a week ago.

Interpol has previously made it clear that it has been knowledgeable of the disappearance of the official. The organization also commented on Meng's disappearance, stressing that the whereabouts of the Interpol official was "a matter for the relevant authorities in both France and China."