US Training Turkish Soldiers for Joint Patrols in Syria 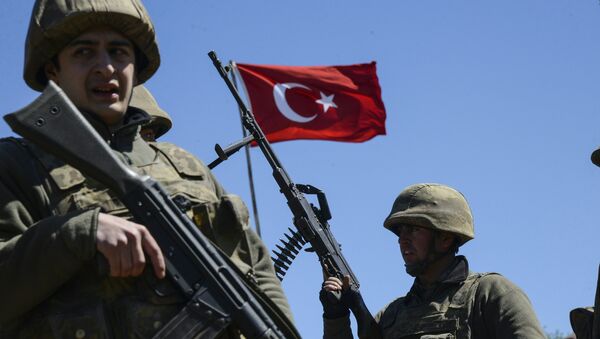 The US has started training Turkish troops ahead of joint patrols the countries will conduct around the Syrian city of Manbij, US Secretary of Defense James Mattis said on Monday as Turkish President Recep Tayyip Erdogan railed against US support for groups he called Kurdish terrorists ‒ and who are America’s main anti-Daesh partners.

The city was liberated from Daesh militants in the summer of 2016 by the Kurdish-dominated and US-backed Syrian Democratic Forces (SDF), which Turkey considers inextricably linked to militant groups it has designated as terrorists, including the People's Protection Units (YPG) in Syria and the Kurdistan Workers' Party (PKK) in Turkey.

The US and Turkey have been independently patrolling the Turkey-Syria border by Manbij. Closing ranks in the effort is intended to prevent the outbreak of any violence between the various factions in the area.

Not everybody agrees that will be the case, however. "Joint patrols between Turkey and US will increase the chances of conflict and deaths of US soldiers," Rick Sterling, a member of the Syria Solidarity Movement, told Sputnik News.

"Patrols in the Manbij region conducted up to now were important," Turkish Foreign Minister Mevlut Cavusoglu told reporters on Tuesday. "Now is time to take completely take the YPG out of Manbij and leave the region to the locals, both in terms of administration and security."

"If this joint training leads to the joint patrols as planned, you will have two NATO members jointly ‘patrolling' a third country in violation of that country's government," Sterling said. Both the United States and Turkey are operating in Syria without the invitation of the government, which considers them occupiers.

"This will mark an expansion of the NATO aggression against Syria — the opposite of what President Trump claimed he was going to do. It will prolong the conflict and bloodshed and risk direct confrontation when Syria and its allies move to expel terrorists from Idlib," Sterling added.

Training was delayed as equipment was delivered and details of the operation were fleshed out.

"We just got to an agreement last week," Mattis said.

On Friday, Turkish media reported that Erdogan accused the US of failure to comply with its agreement on when to pull the YPG from Manbij, a deal reached between the NATO allies in June.

"The announcement of joint training in preparation for joint patrols is probably in response to Erdogan's complaint," Sterling said.

"The United States certainly did not comply with the agreed calendar of the Manbij roadmap; YPG did not exit the area. The real owners of the region are not settled in yet," Erdogan told reporters while he was in the US for the UN General Assembly last week. "The United States did not keep their promise here."

The statement shows Erdogan's "intent for Turkey to occupy and seize Syrian territory in clear violation of international law," Sterling said. "Presumably, he wants the US to be the protector."

The administrators in the city, the Manbij Military Council — a branch of the SDF — announced in July that the YPG had withdrawn. Turkey's Foreign Ministry didn't buy that claim, however, calling it "exaggerated" and not a reflection of the truth.

Before the agreement with the US, Turkey had threatened an incursion on the town despite the presence of American forces, who have used the city as a center for the Combined Joint Task Force for Operation Inherent Resolve, the US' anti-Daesh mission.

Tensions between the countries have risen dramatically over the YPG issue, Turkey's purchase of Russian S-400 anti-aircraft missile systems, US sanctions against Iran and Turkey's continued detention of American pastor Andrew Brunson.

In an interview the same Friday with "PBS NewsHour," the Turkish leader was asked whether he considers the US an ally. "We are strategic partners with America within NATO," Erdogan said, going on to bemoan US threats of sanctions against his country. He complained that the US had not worked with their "strategic partner" — Turkey — but "with a terrorist organization instead" when Raqqa, the former capital claimed by Daesh, was liberated.

"This is what we told the US: we said, ‘You are not doing the right thing.' Now seeing our strategic partner working hand-in-hand with those terrorist organizations is something we could not accept," Erdogan said. "Do you know how much weapons the US sent to the north of Syria? More than 18,000 big truckloads of ammunition and weapons were sent."

According to Mattis, Americans have started training the Turkish military trainers and will soon start training the wider group of soldiers in Turkey.

While Mattis declined to comment on the timing, he told reporters, "We have every reason to think the joint patrols will be coming on time when the training syllabus is complete."

"All of this points to the US not withdrawing from Syria as promised by President Trump," Sterling told Sputnik News.