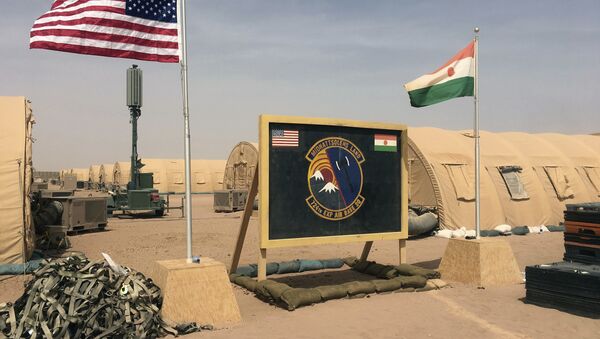 October 1 is the 10th anniversary of the founding of the United States Africa Command (AFRICOM), signaling a much greater focus by the US military on operations in the continent. Today, a new anti-war movement is building ties with activists fighting police brutality in the US to jointly oppose the militarization of Africa and the US.

On October 1, 2008, AFRICOM was activated, having been established a year prior. While the new command gave greater attention to US missions in Africa as a distinct theater of operations, US forces had been involved in African conflicts for decades, including the disastrous Operation Gothic Serpent mission in Somalia in 1993, culminating in the US defeat and subsequent withdrawal after the Battle of Mogadishu.

However, when AFRICOM was established, there wasn't a place on the continent to put its headquarters. Even a decade later, US African operations are based out of Stuttgart, Germany.

This embarrassing situation was orchestrated in no small part by former Libyan leader Muammar Gaddafi, who dedicated much of his career to building uniquely African institutions independent of the western ones such as the International Monetary Fund and World Bank. Libya under Gaddafi bankrolled $150 billion in investments in African projects and set up an African Union Development Bank backed primarily by the Libyan and Algerian governments to reduce African financial dependence on the West, historian and journalist Dan Glazebrook noted in a May 2012 article for Black Agenda Report.

Most importantly, however, Gaddafi went to every country in which the US tried to set up a permanent AFRICOM headquarters and offered that country's government twice the amount of money the US had if they would refuse to set up the base.

The result was that, come February 2008, Africa Command wasn't even in Africa.

"None of this would have been possible whilst Gaddafi was still in power," Glazebrook wrote. "As founder of the African Union, its biggest donor and its one-time elected chairman, he wielded serious influence on the continent."

The idea of relocating AFRICOM headquarters from Germany to Africa has been floated by US lawmakers and military brass several times. The idea was tossed around In 2013, but since AFRICOM doesn't presently operate with dedicated troops assigned to its own command, instead borrowing them from other combat commands, it would take changes in AFRICOM's basic operational structure before moving the HQ would make sense. AFRICOM head Gen. Thomas Waldhauser said in March that moving the HQ would be a significant cost with a questionable return, the Military Times reported.

That is, in part, why exact data for AFRICOM funding is difficult to come by. However, the Operation and Maintenance Overview Fiscal Year 2018 Budget Estimates, filed by the Office of the Undersecretary of Defense (Comptroller)/Chief Financial Officer in June 2017, foresaw a $225.3 million budget for AFRICOM in the coming year.

Radio Sputnik's By Any Means Necessary spoke with Netfa Freeman, analyst at the Institute for Policy Studies and organizer with Pan African Community Action, about what AFRICOM is and how and why activists in the United States struggle against AFRICOM as part of an anti-war, anti-imperialist movement. Freeman told the show his organization had just rolled out a new campaign: US out of Africa, aimed at delivering petitions to the House Armed Services Committee and Congressional Black Caucus.

​"We're seeing a rise in people trying to stand up against militarism and all the excesses that that proposes, and its contradictions with austerity and all of that other kind of stuff," Freeman told hosts Eugene Puryear and Sean Blackmon. "We think this is making an unequivocal stand, and making it very specific that people can do. We also see, in the black radical tradition, which the Black Alliance for People tries to follow in and bring into the peace movement and anti-war movement, that AFRICOM is an assault, the new ‘scramble for Africa.' It's about dominating the continent and making sure that no independent forces that are not beholden to the hegemony of the United States emerge on the continent of Africa."

Africa
One US Soldier Killed, Four Injured in Attack in Somalia

"It is not about fighting terrorism and Islamic extremism, as they propose, and that people really paying attention to the geopolitical situations and circumstances on the African continent in that region would know that the existence of such forces on the continent — the United States is directly responsible for those things, things like the decimation of Libya and all sorts of things. So they really can't be the solution to it, and that really is just a disingenuous claim," Freeman said.

Freeman told Sputnik that what the US is really concerned with is their economic competition with China for dominance over the continent. He noted that militarism and "what has been known as disaster capitalism" have become industries in themselves. Trying to fuel the military-industrial complex "makes AFRICOM one of the things that is necessary."

The 1033 program is a method by which the US armed forces pass on war materials to civilian police forces in the US. Begun formally in 1997 — although the practice began long before then — by 2014, 8,000 local law enforcement agencies had received $5.1 billion in military materials from the Defense Department. In 2013 alone, $449 million was transferred using the program, according to Defense Logistics Agency data. The equipment can be anything from medical supplies and cold weather clothing to aircraft, armored vehicles and military-grade weaponry.

Freeman noted that the media rarely focuses on progressive, indigenous forces in Africa, only on Islamic extremism. It's "like they don't even exist," he said. "We, as African people in the United States, need to be aware of that as well, in terms of what we need to be making connections with on the continent of Africa. And we need to make those links with the EFF [Economic Freedom Fighters group in South Africa] and all that. And what they're saying, when you hear the political line and analysis from them, is talking about continental unity, like you said, the ability to bargain and set trade terms on their own terms."

"I think also we're seeing… something that would be tantamount to the non-aligned movement. They're not calling it that, but [they're] saying, ‘We should have the right to deal with whoever [we like].' And in South Africa right now, particularly, we're seeing a serious challenge to the state, with the ANC [African National Congress]… in terms of the grassroots people having no faith in that, with the scandals and whatnot that are plaguing that; and just the emergence of the EFF and the political clarity that's coming from the leadership there, I'm sure is something that's concerning the United States."

Freeman noted that Americans know extremely little about Africa, with even many members of Congress not even being aware of the US having bases in African countries like Niger until last year's ambush attack in which several US soldiers died.

"It's time to make it crystal clear… to make it known that the interests of those who benefit from this are not the same interests as the masses of people."

"We're for shutting down all [US and NATO overseas] bases. We're for the freedom of all people, not just black people but all people. But for it's a more stark contradiction, like what Malcolm X talked about: ‘They have us going east when we should be going west.' So when we talk about the militarization of Africa itself, and these operations that are actually contributing to the destabilization and the death and destruction of our people — that's us." Freeman described the case of Sergeant La David Johnson, a black US Army soldier who was killed in the Tongo Tongo Ambush in western Niger last October. "He's of African descent, so he's actually fighting a cause that's actually diametrically opposed to his own. We're not taught to identify with Africa in any way," Freeman noted, "but then we have to see that these — I call them ‘enemy forces' — if nothing else tells us we're African, it's their disposition toward us that should tell us we're African."

"At the same time that the independence movements were being undermined by the CIA… in Africa, that was when COINTELPRO and FBI operations were happening against us here in this country. And the same time the proliferation of small arms and everything to instigate turmoil, destabilize the African continent during the ‘80s and ‘90s… that was the same time as the crack epidemic and… essentially the same same [or] very similar destabilization was happening in our communities in the United States and elsewhere in the world."

"And the response? The same: 1033 program and all the militarization of police forces under the guise of getting ‘superpredators' and whatnot, and then on the African continent they increase military presence in the guise of getting so-called ‘undesirable elements' on the continent of Africa. So if we don't understand, they sure do understand and see us as the same people, and they seem to be leveraging the same tactics and same cycle of things against us."

Noting that as anti-imperialists the Black Alliance for Peace is also inherently anti-capitalist, Freeman said that "we're not just concerned with black people — although that's the primary force because we are black — we understand that there are other oppressed people and that we have to forge connections, international connections, coalition-building, movement-building, confronting the powers that be… we're not a pacifist organization. Although we have peace in our name, we know that can't really have real peace without justice: economic, political and social justice. That's what's really important. And also the understanding that the three — capitalism, patriarchy and white supremacy — are things that we really have to look at… together."