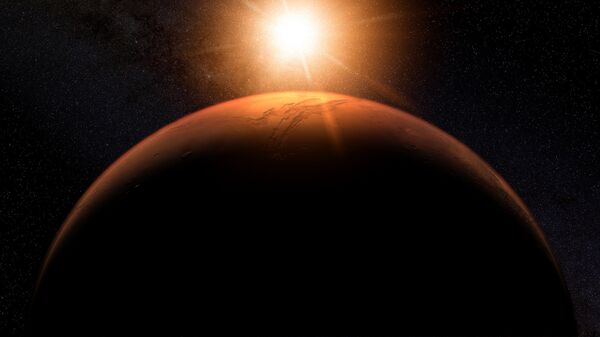 MOSCOW (Sputnik) – Russian scientists from the All-Russian Scientific Research Institute for Physical-Engineering and Radiotechnical Metrology (VNIIFTRI) are developing an optical clock for future spaceflights, including those to Mars, the VNIIFTRI director general, Sergei Donchenko, told Sputnik.

"We are developing a new optical clock that will be used in future space vehicles, for example, for flights to Mars. I think that they will start being used within 10-15 years. It is unlikely that someone will fly to Mars earlier," Donchenko said.

He went on saying that current models of the optical clock were too big to be used in a spacecraft.

Donchenko has also announced the creation of an acoustic gas thermometer that would allow measuring the temperature in Arctic areas as well as on the Moon.

"One more invention is the acoustic gas thermometer, the use of which is especially important for measuring low temperatures. For example, a Russian space vehicle will head for the Moon, where the temperature is minus 150-200 degrees Celsius (minus 238-328 degrees Fahrenheit), but how can one understand whether it will operate under such temperatures? One checks this at special sites. But who can prove that the needed temperature is reached during the tests? Now, when scientists of our institute have created the new thermometer… one can determine the real temperature very precisely," he said.

In March, Russian cosmonaut Oleg Artemyev said that Russia's manned spaceflight to Mars was going to happen in 2030-2040 during ExoMars mission, adding that the activities of US company SpaceX, which was also planning flights to the Red Planet, may motivate Russia to launch their spacecraft earlier.

READ MORE: 'Having People Go to Mars Definitely in Our Future Maybe 20 Years Away' — Prof

Ticket to the Moon: SpaceX Names Its First Lunar Passenger
ExoMars is a joint mission of the European Space Agency (ESA) and Roscosmos. ExoMars-2020 is the second stage of the joint project. The first stage of the project included the launch of the European Trace Gas Orbiter (TGO) and the Schiaparelli Demonstrator Module. Schiaparelli failed to achieve a soft landing, crashing on the surface of Mars in October 2016.

The ExoMars-2020 mission will include the launch of a European Mars rover and a landing module developed in Russia. The Russian landing platform, the final assembly of which is being conducted by Lavochkin NPO, will be equipped with 11 Russian and two European scientific instruments. The Mars rover will have seven European and two Russian scientific devices on board.