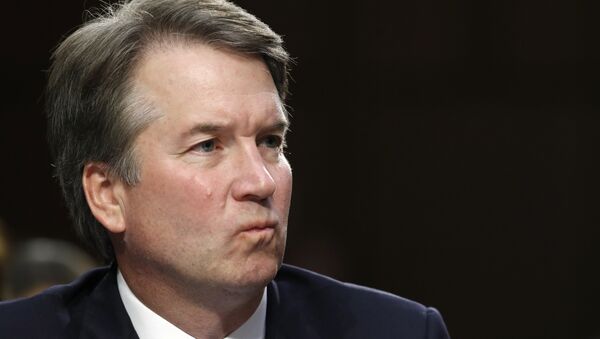 Senate Democrats are looking into a new sexual misconduct accusation against Trump's US Supreme Court Nominee Brett Kavanaugh, made by his ex-classmate at Yale University Deborah Ramirez, while democratic senator Dianne Feinstein has called for an "immediate postponement" of Kavanaugh's consideration.

Ramirez has called for the FBI investigation into the alleged incident that happened in the 1980s during the gathering at Yale, the New Yorker magazine reported. The report published a day after the previous accuser, Christine Blasey Ford, agreed to testify before the Senate on her allegations, said that four Democratic Senators received the information from Ramirez and at least two initiated their own investigation.

Ramirez accused Kavanaugh of exposing himself in front of her; thrusting genitals into her face and making her touch it without her consent as she was intoxicated during the drinking game in the 1983-84 academic year. She said that this incident left her “embarrassed and ashamed and humiliated,” noting that she still cannot recall all the details due to alcohol intoxication. “I would think an FBI investigation would be warranted,” Ramirez said.

In a statement to Fox News Kavanaugh called the report “smear”. “This alleged event from 35 years ago did not happen. The people who knew me then know that this did not happen, and have said so,” Kavanaugh said. “I look forward to testifying on Thursday about the truth, and defending my good name — and the reputation for character and integrity I have spent a lifetime building — against these last-minute allegations.”

White House spokesperson Kerri Kupec, commenting on the issue, said: "This 35-year-old, uncorroborated claim is the latest in a coordinated smear campaign by the Democrats designed to tear down a good man. This claim is denied by all who were said to be present and is wholly inconsistent with what many women and men who knew Judge Kavanaugh at the time in college say. The White House stands firmly behind Judge Kavanaugh."

Meanwhile, democratic senator Dianne Feinstein has called on the Senate to halt Kavanaugh's Supreme Court nomination in the wake of the new allegations. The senator urged "an immediate postponement of any further proceedings," as well as for the newest allegations to be "referred to the FBI for investigation" in a letter to the chairman of the Judiciary Committee senator Chuck Grassley. She also stressed that the FBI needs to investigate the US Supreme Court Nominee background.

‘Have No Idea’: Kavanaugh Accuser's Classmate Backtracks on Sexual Assault Claim
The New Yorker had not confirmed in its report that Kavanaugh was on the party described by Ramirez. An anonymous male classmate, cited by Fox News, denied any memory of the party in question. The New Yorker also collected several quotes from Ramirez’s and Kavanaugh’s Yale classmates. Some of the former students recalled that there was an incident that involved a fake penis prank and a male student exposing himself, but couldn’t recall if Kavanaugh was involved. Some of the dozens of classmates, addressed by the magazine, said that the incident could happen to Kavanaugh and Ramirez because of the heavy drinking parties that were there at the time.

Several statements, published by the magazine, also revealed the quotes from Kavanaugh’s roommates in Yale, who Ramirez alleged to be involved in the prank. A statement from five students and a wife of the sixth student, who was on the party in question, said that they “can say with confidence that if the incident Debbie alleges ever occurred, we would have seen or heard about it — and we did not. The behavior she describes would be completely out of character for Brett.”

Other three classmates, cited by the magazine, said that they don’t have any recollection of the incident, yet they believed Ramirez to be credible and honest. One of them, Kavanaugh’s roommate, said that he never witnessed future judge be engaged in sexual misconduct, but he recalls him being “frequently, incoherently drunk”, suggesting that the allegations could be plausible.

Trump ‘Feels Terribly’ for Kavanaugh, Slams ‘Lousy’ Dems Over SCOTUS Nomination
However, a former female friend, who signed the statement and claimed to be Ramirez’s best friend in college, said “We shared intimate details of our lives. And I was never told this story by her, or by anyone else. It never came up. I didn’t see it; I never heard of it happening.” In the initial conversation with New Yorker she suggested that Ramirez, who is a registered Democrat, could be politically motivated, yet later she said she didn’t know if it was the case.

The magazine reported Ramirez to spend six days collecting the details before publishing her story. She said that her drinking problems and blame prevented her from presenting the story before, however, she decided to go public in order to support Ford’s testimony on Kavanaugh on Thursday. She also noted that her decision was not politically motivated and she “works toward human rights, social justice, and social change.”