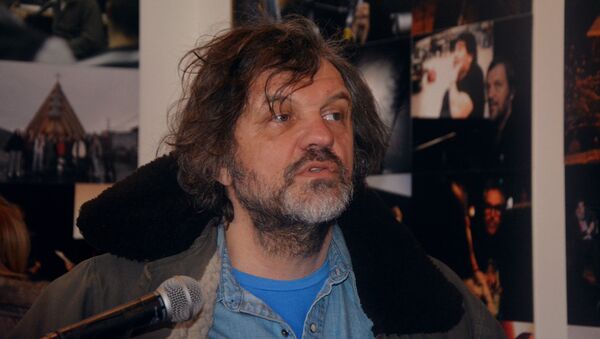 Emir Kusturica says Russia has a "very peaceful" and positive role to play in the Balkan region. "I think that what the Russians, for the last 200 years, are trying to do in the Balkan area is just to help to develop ties and to try to make the world a better place to be," he said.

According to the filmmaker, Western powers, who have accused Russia of meddling, are the ones who have been "meddling all over the world for the last 200 years."

"This is kind of a question of power, from which we are going to be able in I hope twenty years or thirty  years…to say that the world is a more just and better place to be," Kusturica said, noting that he hoped that such a global rebalancing would not lead to any major wars.

Russian FM Lavrov, Republika Srpska President Dodik Hold Joint Press Conference
Asked whether Serbia finds it difficult to find a balance between cooperation with the West and with Russia, Kusturica stressed that "there is brotherhood between us and Russians and other Slavs which we take and consider very seriously. What I always put emphasis on is that if the world is free, which I doubt it is, then we could deal with the Russians and we could deal with the others too. But the politics of the Balkans are [characterized by] the weight of not being able to do business with Russians."

However, according to the filmmaker, the Republika Srpska's friendly relations with Russia prove that such interaction and exchange is possible.

During their meetings in Banja Luka on Friday, Russian, Serbian and Republika Srpska officials discussed economic, political and cultural ties. Russian Foreign Minister Sergei Lavrov, who also met with Bosnian Foreign Minister Igor Crnadak in Sarejevo on Friday, urged world powers not to interfere in the Balkans or create confrontation in the region. Bosnians will go to the polls on October 7 for general elections. Moscow vowed not to back any party, and said it would continue to support the country's territorial integrity amid some calls in the region for broader autonomy or even independence.

Last month, President Dodik vowed that Republika Srpska would apply for UN membership if the breakaway Serbian region of Kosovo was admitted into the organization.