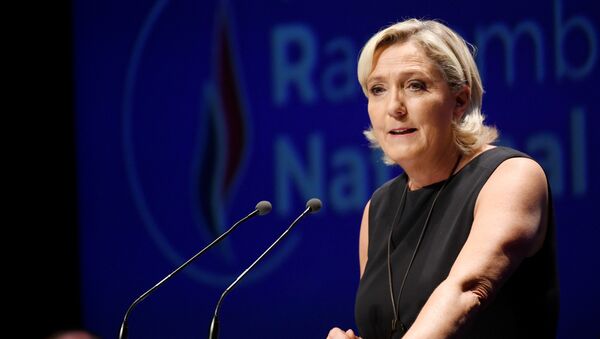 In a fiery speech on Sunday in the southern town of Frejus, French right-wing politician Marine Le Pen said her National Rally party would campaign for European Parliament elections in an alliance with the parliamentary group Europe of Nations and the Freedom Party.

Speaking to supporters in the French town of Frejus, the leader of the National Rally party [formerly known as the National Front] Marine Le Pen presented her vision for the future of Europe, suggesting an alternative to the EU which would be called the Union of European Nations.

Her project, she said, is meant to unite the right-wing parties of Europe, which include the parliamentary group Europe of Nations and Austria's Freedom Party, ahead of the European Parliament’s elections, set for May 23-26, 2019.

“In France, our objective is to beat [Emmanuel] Macron. In Europe, it is to build with our allies, the other groups, a majority that makes a break from the decaying European Union and moves towards a cooperation of nations which respect each other’s diversity and identity,” she announced, adding: “On May 26, 2018, the Union of European Nations will stand against the European Union; nations against the European Commission.”

In the event of victory, National Rally expects to form a solid majority in the European Parliament and implement their ambitious program:

"The transition from the EU to the UEN will take place according to the schedule and procedures of a technical, legal, diplomatic and political nature that will determine the new composition of the parliament. The rising national wave will gain full strength in these eight months that separate us from European elections to sweep away the old world,” Le Pen claimed.

EU is Not Europe

The National Rally leader continued her verbal assault on the EU as she insisted that the bloc doesn’t protect Europe, and that it was ruining the European idea instead.

Later, she designated Matteo Salvini’s Lega party in Italy and the Freedom Party of Austria led by Heinz-Christian Strache as National Rally’s key allies and greeted representatives of the aforementioned parties who were present in Frejus, saying: “We are parties that will fight tooth and nail to defend our nations and our civilization.”

"The great national movement that we embody in our countries and the forerunner of which was the National Front is conquering Europe – all of Europe. […] In Hungary, in Poland, in Austria, in Italy our ideas are taking power,” she declared, placing the rise of right-wing parties across the continent in the spotlight.

She also suggested that Brexit and Donald Trump’s election as US President fitted into the same pattern, as they “marked the defense of national interests, the restoration of borders and the revival of sovereignty.”

“Never in human history have we seen a people that voluntarily organizes the irreversible submersion of its territory,” she said, describing Macron as “the end of a historic cycle,” as she claimed: “By refusing to accept the failure of his adored globalization, he is digging in and accelerating the debacle.”

EU residents are set to vote for the new composition of the European Parliament from May 23 to May 26, 2019. Currently, the political group “Europe of Nations and Freedoms,” which includes the French National Rally, Italy's Lega, the Freedom Party of Austria and other allies, has 35 seats out of 751 in the European Parliament.