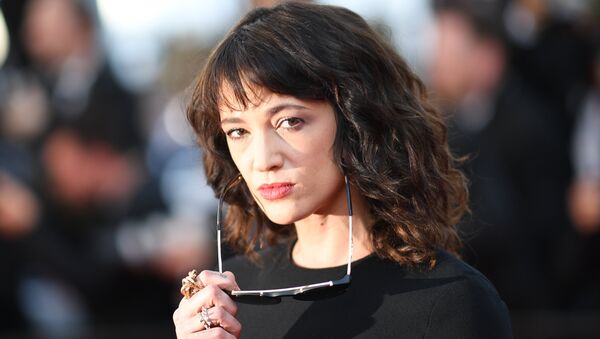 © AFP 2021 / Loic VENANCE
Subscribe
The Italian actress appeared to be at odds with her former #MeToo ally and soul mate Rose McGowan following her statement on the bombshell reports of 42-year-old Argento allegedly having sex with an underage child actor.

Actress Asia Argento has threatened to pursue legal action against Rose McGowan and demanded that she withdraw her previous claims that the famed actress admitted to bedding Jimmy Bennett when he was 17.

“Dear @RoseMcGowan. It is with genuine regret that I am giving you 24 hours to retract and apologise for the horrendous lies made against me in your statement of August 27th. If you fail to address this libel I will have no option other than to take immediate legal action,” Argento’s tweet read.

44-year-old McGowan, who was among the first ones to speak out against harassment issues in Hollywood and notoriously accused producer Harvey Weinstein of sexual misconduct, issued a special statement on the reports that 42-year-old Argento, her fellow #MeToo central figure and close friend, assaulted musician and former child actor Jimmy Bennett at a US Ritz-Carlton hotel five years ago.

Most specifically, McGowan dwelled upon Argento’s presumably telling both her and her partner, model Dove Rain, that she was being extorted every month by “someone who was blackmailing them with a provocative image.”

The actress added that Argento also texted Dove confirming that she did sleep with Bennett and that she had been receiving his “unsolicited nudes.” Their exchange was obtained and published by TMZ late last month, shortly before McGowan came up with her statement.

McGowan went on to say that there were a few more details in the case that “she was not at liberty to mention” in light of the ongoing investigation.

The MeToo pioneer, who notably accompanied Dove to the police to report on the case, rounded off her statement by urging Argento to “do the right thing ” and “be the person you with Harvey could have been.”

The exchange of jabs is now widely discussed on social networks, with Twitterians en masse taking a dig at the MeToo movement claiming it has indeed gained bad publicity and discredited itself. Some, meanwhile, claim they’d prefer someone to silence the quarrelsome pair, Argento and McGowan, once and for all.

Can someone just please cancel Rose McGowan and Asia Argento?

Is this the future of #MeToo when women turn against other women? Asia Argento threatens legal action against fellow activist Rose McGowan regarding the texts of her sexual involvement with an underage teenage male.

First time you use the word “regret” and it’s in a threat. No lessons learned here apparently! #missedopportunity #notgenuine #arroganceisnotattractive pic.twitter.com/Dxp1c1aVl8

Why not take this private ladies?

Asia Argento’s alleged sexual relationship with Bennett, which she has flatly denied on multiple occasions, was first reported by The New York Times on August 19. Argento, then 37, allegedly performed oral sex and then had sexual intercourse with Bennett several years ago, when he was 17, which is below the age of consent in California, where the two reportedly met.

According to the US edition, last October she paid the now 22 year-old actor a "hush" sum of $380,000 to settle the case and get the compromising photos, but the alleged victim is seeking more, a whopping $3.5 million in damages for "intentional infliction of emotional distress, lost wages, assault and battery," which Bennett's lawyers have claimed traumatized the young actor and disrupted his mental health.

000000
Popular comments
Asia doesn't want to take responsability for her actions, but wants to tell of others.... sums up the feminist & #METOO movemnt in a nutshell.