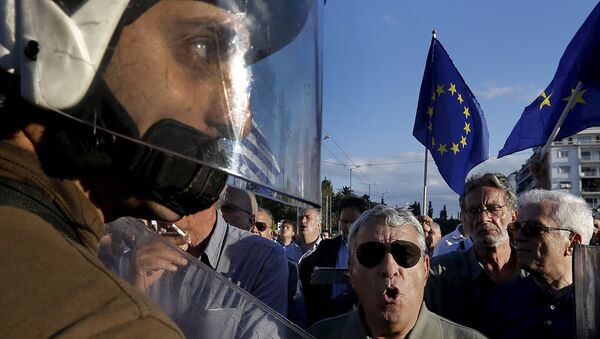 European anti-corruption activists launched a campaign of street protests in France and Germany to challenge what they called irresponsible conduct and questionable business practices of the Eurozone’s biggest financial institutions.

Kristian Rouz – Anti-capitalism activists have launched “direct action” against several of the largest lenders in France and Germany this weekend in a warning against monopolization and irresponsibility in the financial sector. The activists said big banks are the root cause of financial crises and urged tougher surveillance and regulation in the banking sector.

IMF's Lagarde: Joint Eurozone Budget Should Be Conditional
However, activists said the collapse of Lehman Brothers in the US – which triggered the global financial crisis 10 years ago – must not be forgotten, stressing that the majority of risks and structural problems that caused the latest global recession have remained unaddressed.

Some activists conveyed an environmental message as well, saying that big bank investments in fossil fuels might jeopardize the future of the planet and human civilization. Protesters threw orange smoke bombs and poured green liquid on Paris’ sidewalks to decry what they said is “toxic money.”

These protests come shortly after French banking giant Societe Generale agreed to pay almost $1.3 bln to US federal and state investigators to settle a dispute over the US Treasury Department’s sanctions regime. The settlement came as the second such case this month alone, exposing the banks’ alleged involvement in violations of financial crime rules.

Since 2009, several European banks have paid a total of $12 bln to settle financial crime claims and roughly half of this money has gone to city and state authorities in New York.

Among these banks are the French lender Credit Agricole that paid $787 mln in 2015, German   Commerzbank AG that paid $342 mln that same year, as well as the Dutch financial corporation ING, British banks Lloyds and Barclays and French financial giant BNP Paribas.
French activists aren’t particularly happy about such settlements, saying the irresponsible and reckless conduct of the nation’s largest banks is hindering domestic investment, lending and development.

“It’s inevitable, there’s going to be another crisis,” Thomas Coutrot of Attac France said. “It’s absurd and we’re not giving into that.”
Activists also pointed out that several Eurozone member states have still yet to recover from the financial and economic meltdown of 2008-2009 – the aftershocks of which also contributed to the European debt crisis of the early 2010s.

Eurozone Corporate Profits Drop Amid Elevated Trade Concerns
Attac France’s German counterparts railed against big banks as well, launching an event of their own in Frankfurt – the financial heart of the Eurozone. Attac protesters set up what they called a “crime scene,” putting tape in front of the Börse Frankfurt and splattering paint all over the bull statue in front of the building.

“We want a different financial system, one that is not unstable, which is democratically controlled and which does not exploit humans and nature but is beneficial to humans and nature,” Attac’s Alfred Eibl said.

Attac activists also pledged to continue their investigative anti-corruption reporting coupled with “direct action” on the streets all over the Eurozone – until the financial system becomes more fair, transparent and accountable.