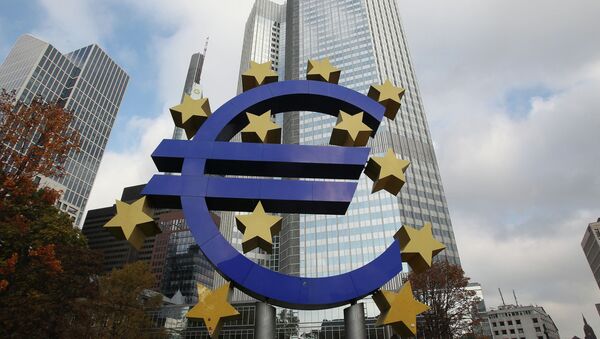 Corporate earnings in the euro area have retreated after last year’s major gains, as business and consumer confidence have shown signs of a slowdown this year due to overseas risks and domestic factors.

Kristian Rouz — A new report from HIS Markit suggests that Eurozone business confidence has dropped to its 18-month lowest, mainly due to a slowdown in industrial activity. The data also points to a gradual cooling of the powerhouse European manufacturing sector each month of this year — after a stunning 52-percent increase in corporate earnings across the top 500 Eurozone companies.

Eurozone 'Always In Danger and Reforms Have Not Gone Far Enough' – Professor
Corporate CEOs say the ongoing turmoil is stemming from the fears of disruptions in the global trade, as US President Donald Trump is seeking to remodel his country's trading relationships with its major partners. Whilst this might be a nuisance for the international supply chains, European CEOs also cited several internal European problems as hampering their expectations.

"German industry got a very weak start in the second quarter," Ralph Solveen of Commerzbank said.

IHS Markit's report highlighted labor disputes, rising salaries and wages, higher energy costs and the strengthening FX rate of the common currency — the euro — have all contributed to the declining business confidence in the Eurozone.

Eurogroup Rules Out New Bailout Program for Greece
This comes despite the Eurozone composite Purchasing Managers' Index (PMI) slightly increasing to 54.9 in June — but still down from 59.0 at the beginning of the year and closer to its 1Q17 levels of 54.5.

Readings above 50 indicate expansion, meaning the Eurozone economy is far from heading towards a recession, but recent dynamics in the PMI — a proxy for official GDP readings — are quite alarming.

"In manufacturing, growth is decent but it has slowed sharply since the start of the year, and firms are getting worried about the escalation in global trade wars," Claus Vistesen of Pantheon Macroeconomics said.

European CEOs also pointed to the recent increases in prices — including commodity prices — that are driving gains in factory input costs. This, in turn, is pushing factory gate inflation higher — and, coupled with a stronger euro, might negatively affect the Eurozone's exports.

Global Investment Pivots to Tech, Financials Amid Trade Woes
This comes as both the input and output costs for private-sector enterprises rose to their seven-year highs over recent months.

Additionally, the elevated geopolitical tensions might be chipping growth points off the services sector — a key driver of the Eurozone's economic expansion.

Some European companies are concerned that their business ties with Iran could be in Jeopardy, whilst other say the trade standoff between the US and China could affect their supply chains in an unpredictable fashion.

"Many service companies — notably, transport — (are) dependent on a healthy manufacturing sector, any downturn in trade could soon spill over to the service sector," Chris Williamson of IHS Markit said.

Amongst the European companies, whose profits declined in the first quarter, are Bayer, Henkel, Continental, BMW, VW and Daimler — and these are all the enterprises with a significant exposure to foreign trade.

Profits of pharmaceutical giant Merck slumped 31 percent, whilst Deutsche Post also posted alarming figures amidst the anticipations of logistical disruptions — which could also affect other businesses.

"The German economy is at the tipping point," Ferdinand Fichtner of the German Institute for Economic Research said.

European Central Bank to End Easy-Money Era in Response to US Fed’s Policies
Non-Eurozone EU members are another separate concern. A significant share of Eurozone exports go to other EU countries, and over the past decade, intra-EU trade has been a major source of the Eurozone's economic expansion. This is aside from the European Central Bank's (ECB) unconventional and massive monetary stimulus.

And the overall slowdown in European manufacturing activity is threatening the intra-EU trade as well, which could see a decline in volumes in the coming months.

The ECB's chief economist Peter Praet confirmed the recent macroeconomic dynamics are a concern for the central bankers. Speaking at Romanian Central Bank in Bucharest, Praet said domestic risks to the Eurozone's GDP growth remain subdued and are under control, whilst the global trade tensions could produce unpredictable developments.

But some officials and investors say a trade war could still be avoided, as EU diplomacy is seeking ways to negotiate compromise deals with the bloc's overseas partners.