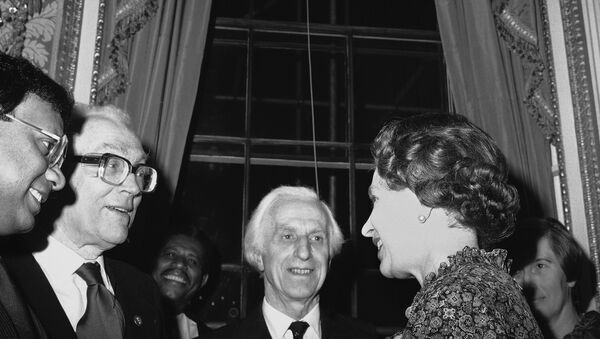 © AP Photo / Staff/Dear
Subscribe
A publication in The Times claims that Michael Foot from the UK’s Labour Party was a Soviet "agent of influence" in the 1960s, with his job being to promote Soviet ideas and reproduce them in articles and speeches for money. The report seems to be the latest instance of the Labour Party being taken a dig at.

Senior UK Labour Party figures and the family of former party leader Michael Foot have expressed their fury over the re-emergence of claims recently that he was a paid KGB collaborator.

The fresh claim, over 20 years after the original allegations made by Soviet agent Oleg Gordievsky, appears in a new book, The Spy and the Traitor, by Times writer and historian Ben Macintyre and also features on the newspaper’s front page on Saturday. Macintyre describes the biography of former KGB Colonel Oleg Gordievsky, who was secretly working for UK intelligence. The book claims that Gordievsky's colleague from the Soviet intelligence agency told him about Foot being employed by the KGB, with Gordievsky further passing on the information to British intelligence via Lord Armstrong of Ilminster, who was "for the best part of two decades at the heart of Whitehall, privy to political machinations and state secrets," The Times article states.

The allegations triggered a storm of reaction both among current British politicians and Foot’s family.

Labour leader Jeremy Corbyn rushed to express his anger at the claims, stating that “Michael Foot loved this country.” “That's why he wanted to make it better for everyone,” he added.

Michael Foot loved this country. That's why he wanted to make it better for everyone.

Smearing a dead man, who successfully defended himself when he was alive, is about as low as you can go.

Neil Kinnock, who succeeded Foot as Labour leader, said his predecessor had been a “passionate and continual critic of the Soviet Union,” its “internal and external despotism,” labeling such post-mortem claims as nothing more than “filthy,” thus echoing Corbyn’s statement:

“He would never have served their purposes,” he said. “When these allegations were made against him in 1995 he sued the Sunday Times and won substantial damages. He has been dead for eight years. Repeating such claims without any substantive additional proof is filthy,” The Guardian cited Kinnock as saying.

Chris Mullin, a former Labour minister who worked with Foot, also chimed in, noting that he believed the claim was “cowardly… given that Michael Foot is in no position to answer back.”

Macintyre’s explosive new book has it that MI6 had been informed about Gordievsky’s claims in the summer of 1982, with British intelligence regarding Foot not as a “spy or conscious agent” but more likely exploiting him for “disinformation purposes,” whereby he allegedly received fees equivalent of £37,000 in today’s money. The book even states that MI6 were prepared to warn the Queen about Foot’s background should Labour have won the 1983 parliamentary election. “It was agreed that should a politician with a KGB history become prime minister of Britain, then the Queen would have to be informed.”

The Times’ story comes as Britain’s relationship with Moscow has hit a new low after two Russian nationals were charged by British officials last week with carrying out a failed nerve agent attack on former Russian intelligence agent Sergei Skripal and his daughter Yulia in Salisbury in early March. While Britain didn’t present any proof of Russia’s involvement in the case, Moscow has reiterated its willingness to sit at the negotiating table with London. Meanwhile, Jeremy Corby is one of those who have publicly questioned the veracity of the security services’ conclusion about Russia’s alleged involvement in the Skripals’ poisoning.

Separately, Corbyn has come under harsh criticism over statements on terrorism, which some British sources have referred to as “troublesome.”

The Labour head also recently appeared at the center of long-standing scrutiny over his party’s reported tolerance of anti-Semites within its ranks, which prompted Corbyn to vow to tackle the “social cancer” of anti-Semitism in the UK and beyond, while admitting that it is a challenging time for the country’s Jewish community.

On top of this, Corbyn’s close aide was accused the other day of working at Westminster without the required security credentials, according to a Huffington Post report.

000000
Popular comments
All that myriad of British Zionist newspaper and mediatic news has only an end, this is to say a panic endeavour of dirty punches under the belt to win a next election. These media must have data that are telling the conservative they may lose the next election. All of these diatribes about anti-Semitic, and now a death Labour leader was a Russian agent in the Russia pay roll, is just preposterous. However, the Zionist media is betting that the ignorant population of about 75% will indeed believe what they publish, the same as the Skripal poisoning, and the two assassin Russian agents in Salisbury and more. The dominance of the British media in the British people way of thinking is extraordinary.