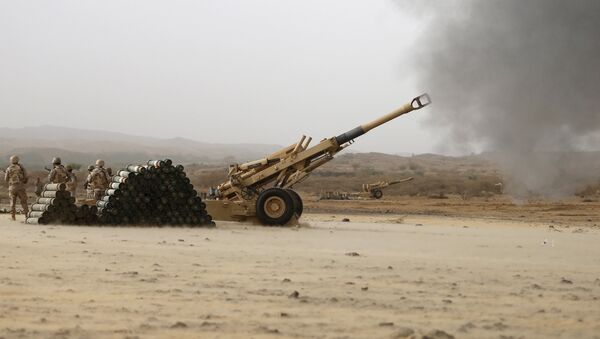 © REUTERS / Faisal Al Nasser
Subscribe
Spain’s defense ministry has canceled the delivery of laser-guided bombs to the Saudi-Arabian government, noting that Riyadh’s war in Yemen has seen some 10,000 killed and an estimated 5 million uprooted.

Yemen is engulfed in a war between the government headed by exiled President Abd Rabbuh Mansur Hadi and the Houthi political opposition movement.

Airstrike Kills One of Al-Qaeda Heads in Yemen - Reports

A Saudi-led coalition of mostly Persian Gulf nations has since March 2015 been carrying out deadly airstrikes against civilian targets, including funerals, hospitals and school buses, with weapons purchased from Spain, the US and other western powers, associated with the Houthi movement at Hadi's request.

According to a report by the Independent last week, Spain signed a contract with Riyadh for 400 bombs in 2015. However, the current Socialist cabinet led by Spanish Prime Minister Pedro Sanchez is now returning the $10 million they received from Riyadh and cancellation the remaining weapons order. Although an unidentified Spanish government confirmed the news, they did not comment any further.

Between 2013-2017, 8.3 percent of Spain's total arms exports went to Saudi Arabia, the Stockholm International Peace Research Institute previously reported. However, last month, the Spanish defense ministry condemned the ongoing killing of civilians in Yemen, stating that they would not sell arms to belligerents who are killing non-combatants.

The war in Yemen began in 2014 after an armed Houthi Shiite opposition party ousted the country's Saudi Arabia-aligned Hadi government. The conflict escalated after a Saudi-led coalition intervened militarily the following year.

In the four years since, an estimated 10,000-plus Yemeni civilians have died in attacks by the Saudi government and their allies, primarily using US-built fighter jets, missiles and targeting technology.

Humanitarian and antiwar groups have criticized the US for selling Saudi Arabia weapons, intelligence and war plane refueling logistics and the guidance technology for missiles and bombs being used to target innocent civilians.

The number of British-made bombs and missiles sold to Saudi Arabia since the beginning of the war in Yemen has increased by almost 500 percent, the Independent previously reported.

On August 9, the Saudi-led coalition targeted a school bus full of children, killing dozens of people, according to the International Committee of the Red Cross. The coalition confirmed that an airstrike on a school bus which killed dozens was unjustified, claiming it would punish those responsible for the mistakes that led to the tragedy.