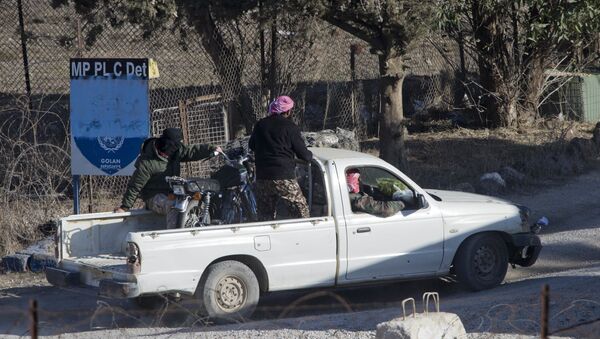 © AP Photo / Ariel Schalit
Subscribe
Israeli military officials came clean on Tuesday about its support for Islamist rebels in Syria, a subject it has been coy on since the outset of the war in the country ‒ at least according to an article later inexplicably deleted by the Jerusalem Post.

It has long been an open secret that Israel was arming and supporting groups seeking to overthrow the government of Syrian President Bashar Assad. Reports of Israel treating al-Qaeda-linked extremist fighters of the Al Nusra Front in their hospitals under Operation Good Neighbor have fueled speculation of a deeper connection between the so-called rebel groups occupying the Golan Heights and Israel, which illegally annexed the western two-thirds of the area in 1967. In 2015, before the official launch of Operation Good Neighbor, then-Israeli Defense Minister Moshe Ya'alon characterized their support for Golan Islamists as humanitarian and as a bargaining chip to keep the militants from slaughtering members of the Druze minority in the area.

But on Tuesday, Israeli authorities admitted that Operation Good Neighbor is more than just a super-secret, codenamed, humanitarian mission — and in fact gives the potpourri of the seven or so jihadist groups in the Golan light arms and munitions. That's according to the Jerusalem Post, which deleted an article summarizing the subjects of a Tuesday press conference held by senior members of the Israeli Defense Forces. The outlet has not said why it deleted the article, despite questioning on the subject from Twitter users, and other Israeli media outlets have not reported on the statements about light weapons.

However, this is also something that Syria has claimed for years.

Meanwhile, members of Fursan al-Joulan, an anti-government group which consists of just 400 fighters, gets some $5,000 a month from Tel Aviv.

"Israel stood by our side in a heroic way," Joulan spokesman Moatasem al-Golani told The Wall Street Journal in 2017. "We wouldn't have survived without Israel's assistance."

While it is difficult to make sense of the miscellany of extremist fighters in the Golan, "everyone" in the Syrian village of Hader in the Golan believes the Israeli government and the West "tacitly" support Al-Nusra, according to a May report from UK Channel 4 News. One villager called them "proxies."

At the Tuesday press conference, the Israeli military announced that it had attacked more than 200 allegedly Iranian and Hezbollah-run military installations in the past year and a half in Syria, using more than 800 bombs and missiles.

Israel has intermittently bombed bases in Syria for years, but such campaigns ramped up in the wake of the US withdrawal from the Joint Comprehensive Plan of Action (JCPOA), or Iran Nuclear Deal. Within an hour of the announcement, Israel started hammering targets in Syria, claiming they were Iranian military entities. Israeli Defense Minister Avigdor Lieberman said Israel struck "nearly all the Iranian infrastructure in Syria," Sputnik News reported.

Israel has continued to attack Syria under the Iranian pretext since then. Assad said in a late May interview with RT, "We had tens of Syrian martyrs and wounded soldiers, not a single Iranian," adding, "So, how could they say that we have [Iranian bases]? So, it is a lie."