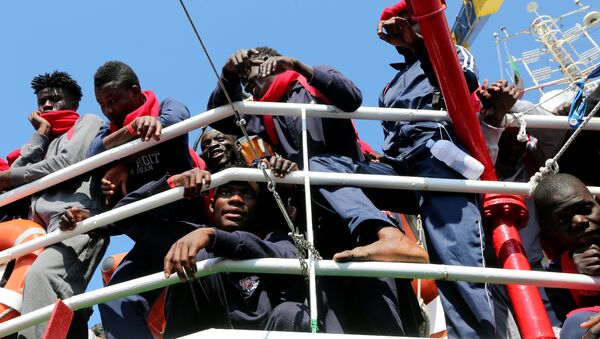 © REUTERS / Stefano Rellandini/File photo
Subscribe
International
India
Africa
The Italian government wants to reduce the number of migrants leaving North Africa to seek asylum in Europe and believes this would help ease tensions among EU members over their internal borders.

Italian Prime Minister Giuseppe Conte said on Friday that the EU had failed to live up to its principles of "solidarity and responsibility" after envoys from EU states meeting in Brussels hadn’t reached a deal to distribute the 150 migrants on board an Italian coastguard ship Diciotti docked in Sicily since Monday.

Conte also said there was a gulf "between [EU’s] words and actions" that is colored by "hypocrisy."

Italy Threatens to Halt Payments Amid Migrant Row, EU Gives Tough Response
Deputy Premier Luigi Di Maio warned on Thursday that Rome could stop making financial contributions to the EU budget next year unless other member-states agreed to take in migrants stranded on board the Diciotti.

Interior Minister Matteo Salvini, who heads the anti-immigrant League (Lega) party, has insisted the migrants will not be allowed ashore.

Salvini later took a step back from his uncompromising stance suggesting in a radio interview that some migrants from the Diciotti might be allowed ashore after it had been ascertained that they are indeed “real refugees.”

"I'm considering the possibility of carrying out identification and recognition procedures to identify real refugees, who are the minority, from fake refugees before they disembark," Salvini told state broadcaster Rai on Friday.

The European Commission said on Friday it will follow rules governing migration, rather than bow to threats.

Matteo Salvini remains defiant in the face of an investigation and says it is his job to protect the country.

"If someone is thinking about arresting me, they're mistaken, because the Italian people are asking for order, rules, respect and controlled immigration," he said.

The EU is bitterly split over the issue of how to accommodate migrants even though arrivals are down dramatically from their 2015 peak of more than a million.

Italy and Greece, who feel overrun by the flow on migrants from North Africa and the Middle East, and the EU’s eastern members, such as Poland, Hungary and the Czech Republic, refuse to host any of the new arrivals.

The new Italian government has declared the fight against illegal migration one of its main priorities.