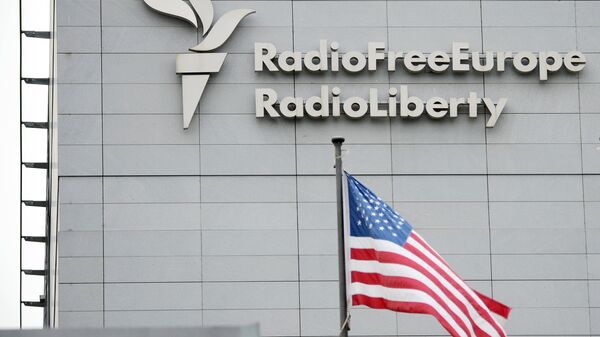 © Sputnik / Alexey Vitvitsky
/
Go to the mediabank
Subscribe
International
India
Africa
Kit Klarenberg
All materials
The Broadcasting Board of Governors (BBG), the little-acknowledged US government body employing thousands of journalist and media professionals, has been rebranded the US Agency for Global Media (USAGM).

In a statement, the newly-minted USAGM's CEO John F. Lansing boasted the organization operated "far beyond traditional broadcast mediums", such as television and radio — the name change was thus necessary as "the term ‘broadcasting' does not accurately describe what we do".

However, the new moniker arguably doesn't accurately describe what the organization does either.

Some hint as to USAGM's true nature lies in the press release itself. As Lansing states, the agency's "global priorities…reflect US national security interests", which are broadcast to "an unduplicated weekly audience of 278 million people in 59 languages and in more than 100 countries".

Further clue as to USAGM's objectives and operations can be found in USAGM's portfolio of media assets includes Voice of America (VOA), Radio Free Europe/Radio Liberty (RFE/RL), Office of Cuba Broadcasting (Television and Radio Marti), Radio Free Asia (RFA), and Middle East Broadcasting Networks (MBN). As is now openly admitted by the US government, each outlet was established to perpetuate pro-Washington propaganda — both in the nations and regions in which they broadcast, but also in the USA itself — and undermine and discredit ‘enemy' governments.

For instance, as the Central Intelligence Agency documents on its own website, Radio Free Europe's lie in the June 1949 creation of the National Committee for Free Europe (NCFE). Comprised of a group of prominent American businessmen, lawyers, and philanthropists — including Allen Dulles, who would become Director of Central Intelligence in 1953 — the organization was "the public face of an innovative ‘psychological warfare' project" undertaken by the CIA.

"That operation would become one of the longest running and successful covert action campaigns ever mounted by the United States," the CIA brags.

NCFE ran annual fund-raisingers — called the Crusade for Freedom — in which Americans were urged to donate "freedom dollars" to the organization, in order to break down the Iron Curtain, which every president from Harry Truman to Richard Nixon endorsed. These efforts would yield a flurry of donations, but the sums barely covered the costs of running the annual fund-raising campaigns themselves, let alone Radio Free Europe's actual budget. In reality, the CIA provided the bulk of the bankrolling — and the body remains entirely dependent on US government subsidy to this day.

However, the origins of Voice of America and Radio Free Europe go back even further — and are even more questionable.

Towards the end of World War Two, Frank Wisner — then-head of Office of Strategic Services, the forerunner of the CIA — proposed 250 Nazis be brought to the US from Europe, of which 100 would work for Voice of America, and the rest would be employed at Radio Free Europe. Among them were individuals who'd been involved in Nazi Germany's 'weltanschauung' (worldview warfare) efforts, the progenitor of modern psychological warfare.

The Nazi connections to Radio Free Europe do not end there — the names of the propaganda entities created by the Nazis on the Eastern Front were in many cases copied for the new American psychological warfare organizations. For instance, the front company behind Radio Liberation (now Liberty), American Committee for the Liberation of the Peoples of Russia, was an English translation of ‘Komitet Osvobozhdeniia Narodov Rossi', which was created on the orders of Heinrich Himmler during Operation Barbarossa and attempted to unite the occupants of German-occupied areas of the Soviet Union against Communism.

The close links between Nazi Germany and the US government propaganda bodies was noted at the time — and to cover their tracks, station chiefs quickly banned the use of the term ‘Bolshevism', due to its associations with Adolf Hitler. Nonetheless, no former Nazis were fired, and they continued to promote their anti-Communist agenda to millions the world over.