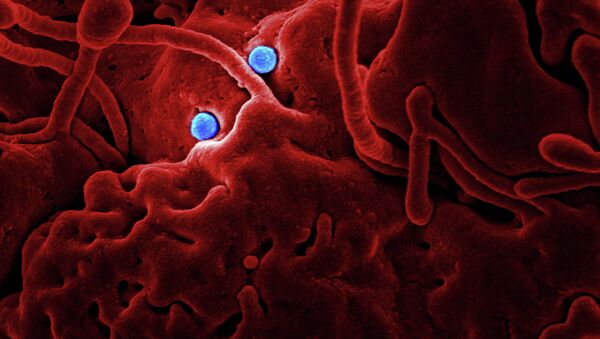 © Flickr / NIAID
Subscribe
A patient from the Middle East is being treated for the killer MERS virus in England, Public Health England has confirmed - and the body is now desperately trying to locate passengers who travelled on the same journey from Jeddah, Saudi Arabia as the unnamed individual, fearing they too may be infected.

The patient — a resident of the Middle East, whose name, age and gender cannot be released — flew into Manchester airport, was subsequently diagnosed at a hospital in Leeds, before being moved to a specialist centre in Liverpool.

MERS, caused by the Middle East Respiratory Syndrome coronavirus, kills a third of those it afflicts — it has no known cure, and is considered one of the 10 most urgent threats to humanity by the World Health Organization, along with alarming viruses Ebola and Zika, which have both caused brutal pandemics in since 2014.

Poorly understood by virologists, MERS produces many of the same symptoms as a common cold — but can fatally lead to pneumonia and kidney failure. It can be spread by touching infected camels, or infected individuals.

As a result, Public Health England are seeking to contact anyone who had "close and sustained" contact with the patient — particularly those who flew from Jeddah with Saudi Arabian Airlines on flight SV123 August 16.

It's only the fifth case of MERS to be diagnosed in England — but comes not long after Public Health England warned the risk of "imported cases" in the UK was high and rising, and health professionals "should remain vigilant".

In particular, the organization expressed anxiety over Muslim Britons contracting the virus during ‘Hajj' or ‘Umrah' — pilgrimages to Mecca that every Muslim's duty to complete. Around four million Muslims from around the world take part in the former each year, with an estimated 25,000 hailing from the UK. 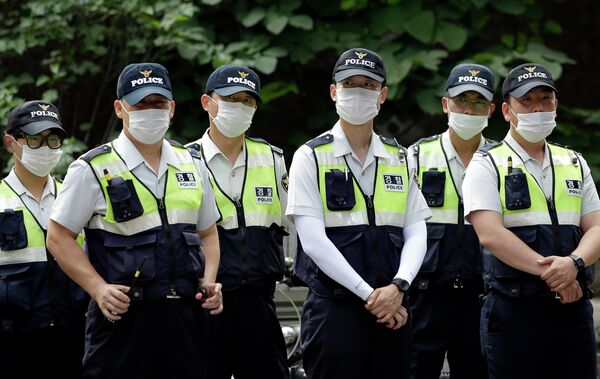 Police officers wearing masks as a precaution against Middle East Respiratory Syndrome (MERS) stand guard during a rally in Seoul, South Korea
© AP Photo / Lee Jin-man
Nonetheless, the disease is largely restricted to the Arabian Peninsula, with over 90 per cent recorded in Saudi Arabia. However, there a numerous instances of the disease being exported to France, Germany, Italy and the Netherlands.

The troubling news follows mere hours after the first case of donovanosis — a rare sexually transmitted disease causing flesh-eating ulcers to appear near an individual's genitals — was diagnosed in the UK. The STD is typically only found in tropical regions, including parts of India, Papua New Guinea, the Caribbean, central Australia and southern Africa. 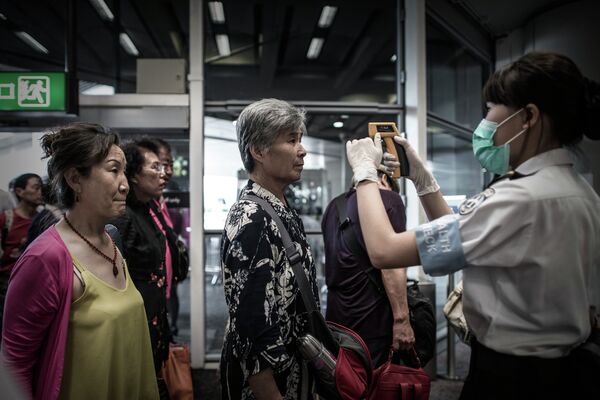 Passengers get their temperature checked as part of preventive measures against the spread of Middle East Respiratory Syndrome (MERS) at the Hong Kong international airport on June 5, 2015
© AFP 2022 / Philippe Lopez
Although the virus, also known as granuloma inguinale, is treatable with mere antibiotics, infected individuals should seek medical attention quickly. Even with antibiotic use, patients are still at risk of relapse for six to eight months post-treatment. The disease is also a risk factor in the transmission of HIV.
Newsfeed
0
New firstOld first
loader
LIVE
Заголовок открываемого материала
Access to the chat has been blocked for violating the rules . You will be able to participate again through:∞. If you do not agree with the blocking, please use the feedback form
The discussion is closed. You can participate in the discussion within 24 hours after the publication of the article.
To participate in the discussion
log in or register
loader
Chats
Заголовок открываемого материала
Worldwide
InternationalEnglishEnglishMundoEspañolSpanish
Europe
DeutschlandDeutschGermanFranceFrançaisFrenchΕλλάδαΕλληνικάGreekItaliaItalianoItalianČeská republikaČeštinaCzechPolskaPolskiPolishСрбиjаСрпскиSerbianLatvijaLatviešuLatvianLietuvaLietuviųLithuanianMoldovaMoldoveneascăMoldavianБеларусьБеларускiBelarusian
Transcaucasia
ԱրմենիաՀայերենArmenianАҧсныАҧсышәалаAbkhazХуссар ИрыстонИронауОssetianსაქართველოქართულიGeorgianAzərbaycanАzərbaycancaAzerbaijani
Middle East
Sputnik عربيArabicArabicTürkiyeTürkçeTurkishSputnik ایرانPersianPersianSputnik افغانستانDariDari
Central Asia
ҚазақстанҚазақ тіліKazakhКыргызстанКыргызчаKyrgyzOʻzbekistonЎзбекчаUzbekТоҷикистонТоҷикӣTajik
East & Southeast Asia
Việt NamTiếng ViệtVietnamese日本日本語Japanese中国中文Chinese
South America
BrasilPortuguêsPortuguese