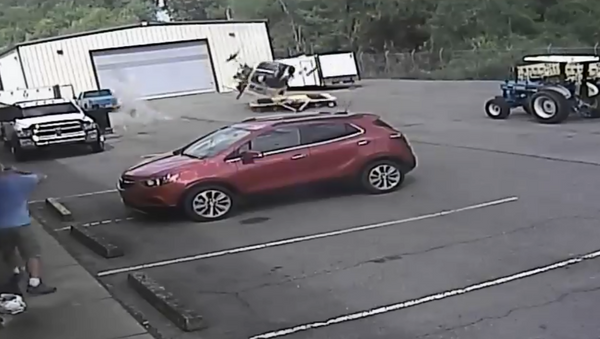 Arkansas' Little Rock Police Department released surveillance footage on Tuesday showing the moment one of its helicopters crashed suddenly and violently as it was undergoing equipment testing last week.

Video posted on the department's Facebook page shows the observation chopper, a 2001 Bell TH-67, parked on a flatbed trailer, rotary blades spinning. One minute into the footage, just as the copter begins to rise into the air, disaster strikes: harsh winds send the aircraft crashing.

​A man can also be seen urging the pilot to ground the helicopter and kill the engine seconds before the craft turns on its side, destroying the rotary blades and sending shards of metal flying into the air.

According to the Northwest Arkansas Democrat Gazette, the pilot, retired officer William Denio, sustained a severe head injury in the accident and was transported to a local hospital. As of Tuesday afternoon, he was deemed in stable condition.

​Denio was testing out the helicopter's battery when a straight-line wind triggered the August 16 crash. Lt. Michael Ford, spokesperson for the Little Rock department, says the chopper is beyond repair.