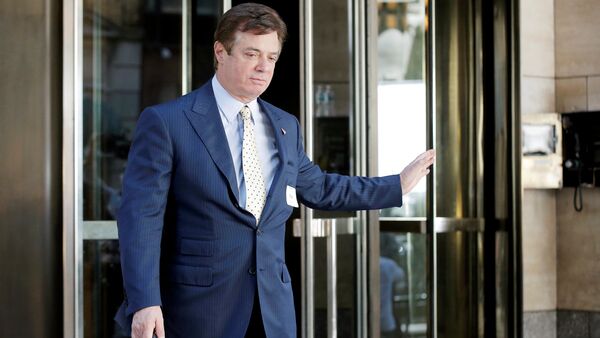 © REUTERS / Brendan McDermid
Subscribe
Among the charges he was found guilty of are five counts of tax fraud, two counts of bank fraud and one count of failing to disclose foreign bank accounts. The jury said in a note it had not reached consensus on the other 10 counts, and the judge declared a mistrial on those counts.

Judge Thomas S. Ellis III excused the jury after the verdict and encouraged members not to talk to the press but did not bar them from doing so, saying, "I suggest to you that you have a duty of confidentiality."

The first trial of Paul Manafort, briefly the manager of US President Donald Trump's 2016 election campaign, went on for four weeks and the jury deliberated for four days. The trial at the federal courthouse in Alexandria, Virginia, is the first stemming from special counsel Robert Mueller's investigation of Russia's supposed role in the 2016 US election. In this case, Mueller's probe turned up evidence of financial crimes, but no connection to Russia, or to the Trump campaign.

Prosecutors argued that Manafort hid money in foreign bank accounts and failed to claim it on his taxes. They also argued that he obtained $20 million in falsified bank loans. All 27 witnesses during the trial were for the prosecution — Manafort's defense team called none.

The jury found that Manafort stashed $15 million in secret foreign bank accounts, many of them based in Cyprus, to hide money he received while working for then-Ukrainian President Victor Yanukovych.

During their four days of deliberations, the jury asked Judge Ellis for several clarifications, including the definition of the term "reasonable doubt," as they were required to find guilt beyond reasonable doubt in order to convict Manafort. Other questions included clarification of the requirements for US citizens to report financial interests in foreign bank accounts and what a shell company is, since Manafort allegedly used such an entity to accept payments and move money into secret bank accounts.

Manafort faces up to 305 years in prison. The charges he has been found guilty of so far carry steep sentences. Each of five counts of subscribing to a false income tax return carries a maximum of three years in federal prison; the count of failing to report a foreign bank account carries a five-year maximum sentence; and each of his two counts of bank fraud carries a maximum of 30 years behind bars.

Judge Ellis has not yet set a sentencing date and has given prosecutors until August 29 to decide whether to retry Manafort on the deadlocked charges.
US Senator Richard Burr (R-NC) told Reuters Tuesday that any attempt by Trump to pardon Manafort "would be a gross abuse of power" and would require an immediate congressional response. Burr heads the Senates Intelligence Committee.

Manafort's attorney, Kevin Downing, told the press outside the courthouse Tuesday that his client thanks Judge Ellis for a fair trial and the jury for their thoughtful deliberation. He noted that Manafort is "reviewing all options" and that they were disappointed not to get a hung jury on all counts.

Regardless of the outcome of the remainder of this trial, Manafort faces a second trial in Washington, DC, next month, focused on allegations of lying to the FBI, money laundering and foreign lobbying. Mueller's office has supplied prosecutors with more than double the amount of evidence as the first trial — over 1,000 exhibits, compared to 400 displayed in the Virginia case — according to a court filing Thursday.