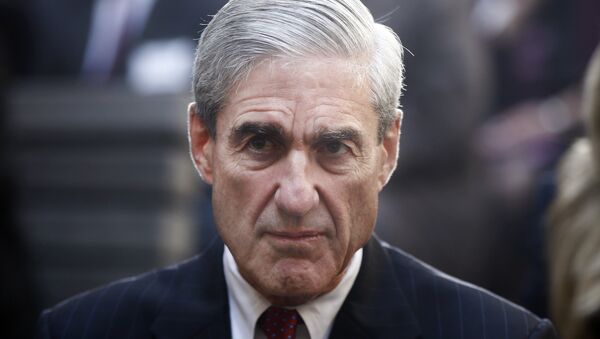 Papadopoulos claims to have had contact with a foreign professor whom he believed to have "substantial connections" to Russian government officials and informed him that the Russians possessed "dirt" on former Secretary of State Hillary Clinton. He said he was told of the dirt in April 2016, before the Democratic National Committee and Clinton campaign chair John Podesta were hacked.

The professor, identified as Joseph Misfud of the London Academy of Diplomacy, disputed Papadopoulos' account of the meeting and denies that he has connections to the Russian government.

President Trump has characterized Popadopoulos as a 'proven liar.' Papadopoulos has been revealed to have embellished the credentials listed on his LinkedIn page.

Russiagate Makes US Look Like a ‘Megalomaniac Drunkard on a Binge'
The adviser only met with Trump once in March 2016 along with other aides. Previously, Papadopoulos worked as a foreign policy adviser to Trump primary opponent Ben Carson.

Mueller took over the counterintelligence investigation into Trump-Russia collusion, originally started by fired FBI agent Peter Strzok on July 31, 2016, with the mandate of investigating "any links and/or coordination between the Russian government and individuals associated with the campaign of President Donald Trump; and any matters that arose or may arise directly from the investigation."

So far, the probe has netted indictments pertaining only to the latter mandate. Mueller alleged a number bank fraud and other corruption crimes against former Trump campaign manager Paul Manafort.

Fault Lines
Is It #RussiaGate or #SpyGate? - The Ongoing Circus in Washington DC
He has also indicted 13 Russian nationals for allegedly trolling on social media, and 13 accused Russian intelligence officers for the hacking of the Democratic National Committee. Moscow denies that the alleged hackers are a part of its intelligence aparatus.

Approximately 41 percent of Americans want Mueller to conclude his investigation before the 2018 elections in November, a poll commissioned by The Hill found on Friday.