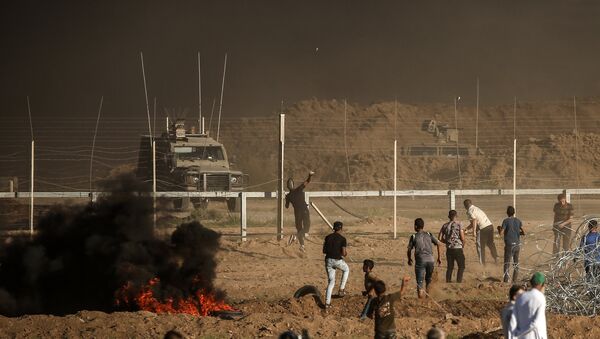 The Gaza Health Ministry reported Friday that two protesters were killed amid demonstrations along the Gaza border fence.

The protesters were throwing rocks and firebombs at Israeli troops, hiding behind clouds of black smoke of burning tires. The Israeli Defense Forces responded with tear gas and live fire.

As the IDF stated, they "fired live rounds selectively according to standard operating procedures," adding that some Palestinians also threw improvised explosives at the fence and several others were spotted trying to infiltrate the Israeli territory.

The weekly protest led by Hamas was aimed to attract attention to the Israeli-Egyptian blockade, which was set after the militant group took control of Gaza in 2007. Apart of protests, Hamas has currently been holding meetings with Egyptian officials in Cairo, seeking a possible truce.

#Updates…
Until now…more than 20 Palestinian protester were injured in Gaza,two of them is criticaly injured in the Friday of Revoluationries for Jerusalem and Al-Aqsa Mosque.#GreatReturnMarch pic.twitter.com/FOza2x2LHI

​On August 13, Channel Ten reported that Israeli Prime Minister Benjamin Netanyahu and several advisers, as well as security guards, visited Cairo on May 22 for talks with Sisi in an effort to settle the crisis around Gaza triggered by the opening of the US embassy in Jerusalem and the anniversary of the establishment of the State of Israel, which prompted a Palestinian exodus in 1948.

The next day Defense Minister Avigdor Lieberman announced that the Kerem Shalom crossing into Gaza would reopen if the situation on the border was calm.

Israel has repeatedly accused Hamas of using the protests to covering attacks along the country's border with Gaza. The IDF underlined that its actions during the ongoing rallies are aimed to defend Israeli borders.

​The tensions between the Israelis and the Palestinians near the Gaza border has been growing since late March, which marked the beginning of the Palestinian protest campaign against Israel, dubbed the Great March of Return. Over 160 Palestinians were killed in clashes since that time.

However, since the beginning of protests, Israel and Hamas reached a number of temporary ceasefire agreements through Egyptian mediation.