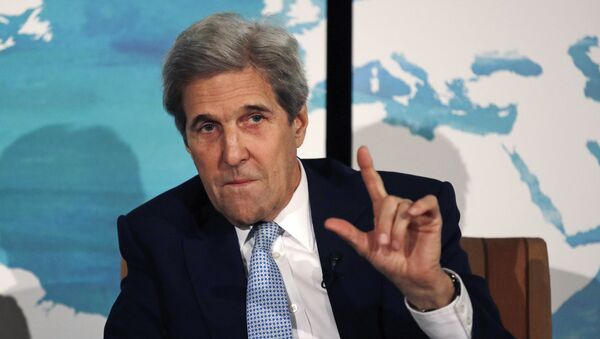 © AP Photo / Charles Krupa
Subscribe
International
India
Africa
WASHINGTON (Sputnik) - Former US Secretary of State John Kerry said in a statement on Wednesday that the decision by President Donald Trump to revoke the security clearance of Ex-CIA Director John Brennan is behavior he would expect in a "banana republic," not the United States.

"This is putting personal petty politics ahead of patriotism and national security, end of story. You expect this banana republic behavior in the kind of countries that the State Department warns Americans not to travel to, but not at home in the USA," Kerry said in a Twitter message.

Trump Revokes Security Clearance of ex-CIA Director John Brennan - White House
Earlier on Wednesday, Trump said in a statement that he was revoking Brennan's security clearance because of his constitutional responsibility to safeguard the country's classified information and those who have access to it.

Trump said Brennan's behavior has been unprofessional and accused him of using his status to make a "series of unfounded and outrageous allegations, wild outbursts on the internet and television about this administration."