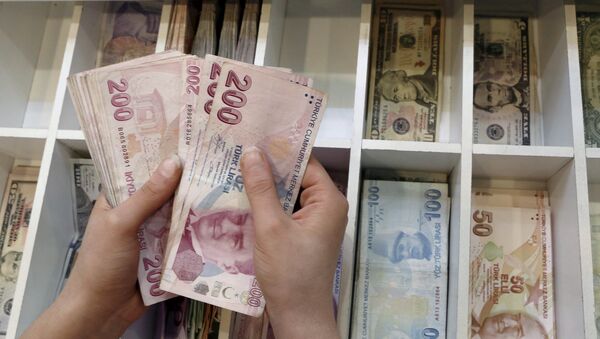 The process of de-dollarization, which specifically stipulates scrapping the dollar as the world's reserve currency, continues to gain strength among the BRICS countries and in Iran. Turkey is also taking active steps in this direction, which indicates its desire to ditch the dollar, Turkish political analyst Can Selcuki told Sputnik.

Can Selcuki, director general of the Research Center for Economic and Foreign Policy Issues (EDAM) in Turkey, recalled that during a recent BRICS summit, Turkish President Recep Tayyip Erdogan warned that if the West does not abandon its policy of pressuring Turkey, Ankara will use alternative measures, including the use of its national currency during trade transactions.

"However, it is hard to say with certainty how realistic this step will be. Despite the fact that significant volumes of products imported by Turkey are supplied by China, Germany and Russia, the prices for many types of imported goods are tied to the dollar," Selcuki said.

He explained that avoiding the dollar will only be possible if Ankara manages to implement the pricing of domestically-made products completely in local currency, an option which he said currently "looks unrealistic."

Selcuki also pointed to the fact that the Turkish lira is now under "severe pressure" and that it is losing value against the US dollar and the euro.

"Thus, Turkey's desire to carry out trade operations with a number of countries in its national currency is a step aimed at freeing the lira from the pressure of the dollar, especially in   the current situation when Turkish-American relations are in a grave crisis and Washington is imposing sanctions against Ankara," he underlined.

READ MORE: US Sanctions on Turkey to Have 'Far-Reaching Consequences' — Analyst

Russian economics expert Valentin Katasonov, for his part, told Sputnik that the de-dollarization press should be implemented on a comprehensive and step-by-step basis.

"First and foremost, the emission of currency-related models should be changed so that the national monetary unit can be supported not by US currency but by real projects of the national economy. Secondly, it is necessary to abandon the use of foreign currency when conducting domestic transactions. And thirdly, the use of the dollar in cross-border currency transactions should be stopped," Katasonov emphasized.

Turkey's Erdogan Defiant Amid US Tensions: 'They Have Dollars, We Have Our God'
In late May, Turkish President Recep Tayyip Erdogan urged citizens in a speech at a rally in the city of Erzurum to convert their holdings of US dollars and euros to the national currency, the lira, in a bid to halt the dwindling exchange rate.

Earlier, Erdogan urged the International Monetary Fund (IMF) to nominate its loans in gold instead of dollars in order to "save states and nations from this currency pressure."

The Turkish national currency has lost 20 percent of its value to the US dollar since beginning of the year.