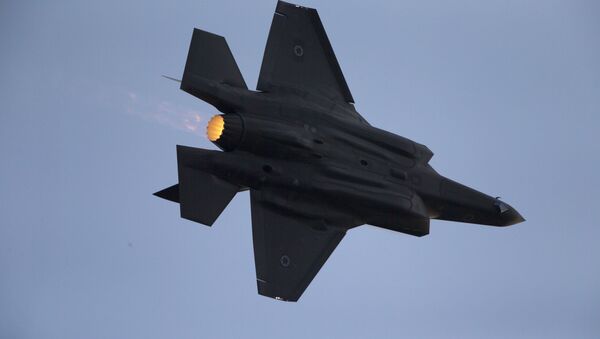 © AP Photo / Ariel Schalit
Subscribe
The recent round of violence between Israel and the Palestinian enclave of Gaza has left at least 140 Palestinians and an Israeli soldier dead since March 30. The day commemorates the events of March 30, 1976, when Israeli forces killed six Arab citizens of Israel during protests over the government’s expropriation of Arab land in northern Israel.

In a video posted online on Wednesday, Israeli warplanes are seen launching a series of airstrikes on "terroris sites" in Gaza City in the besieged Gaza Strip on Wednesday after rockets from the Palestinian enclave were launched towards Israel.

Israel Defense Forces Launch Airstrikes on Hamas Targets in Gaza
Local media reported that the large-scale airstrikes targeted military facilities of the Islamic Hamas movement, primarily in the Jabaliya area in northwestern Gaza Strip and in the Rafah area in southern Gaza.

Two Palestinians injured in the strikes were transferred to al-Shifa hospital in Gaza City for medical treatment.

Earlier on Wednesday, eight rockets were launched from the Gaza Strip towards southern Israel, an Israeli military spokesperson said in a statement adding that two rockets were intercepted by Israel's Iron Dome anti-rocket system.

According to local radio reports, the Israeli army plans to  carry out more airstrikes on militant facilities in the Gaza Strip.

The Israeli airstrikes came a day after two Hamas fighters were killed in Gaza in an Israeli artillery attack, launched after Israeli forces mistakenly thought that Hamas militants had opened fire on them.

Hamas promised to avenge the killings.

The incidents are expected to hamper Egypt's effort to broker a ceasefire between Israel and Hamas, the Islamist Palestinian group that runs Gaza.