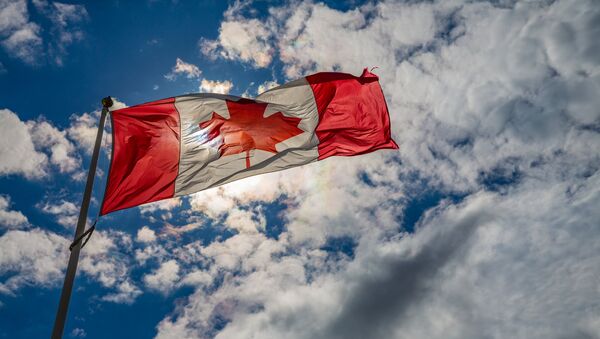 CC BY-SA 2.0 / Tony Webster / Canadian Flag
Subscribe
Saudi Arabia has suspended Toronto flights amid an ongoing row with Canada. According to reports, Riyadh has also frozen all trade and expelled the Canadian ambassador from the country. The news comes after Canada criticized human rights in Saudi Arabia. Sputnik discussed this with Dr. Denis Rancourt, a civil rights advocate and social theorist.

Sputnik: How significant is this row between Canada and Saudi Arabia? Could it be nipped in the bud or is it likely to expand and involve other countries?

Dr. Denis Rancourt: You know the relationship between Canada and Saudi Arabia, trade-wise, is about $3 billion per year, which is less than 1% of Canada’s trade, ingoing and outgoing. The Saudi Kingdom represents the 20th trading partner with Canada; so it’s not a big deal in absolute terms economically. But it is a big deal in terms of everything that's happening and politically it’s a big deal. At the moment, the Canadian Parliament is not sitting and this is a low media cycle, the deadest time of the year, so the government is very fortunate here in Canada for that reason; but it’s certainly a huge diplomatic row which will not go away immediately.

READ MORE: ‘We Can’t Do it For Them’: Washington Bows Out of Saudi-Canada Row

Sputnik: Do you feel that Canada is going to back down or are they going to be more robust about it moving forward?

Dr. Denis Rancourt: They can’t easily back down because they would lose face. We’re talking about some tweets here. I think that Canadian demands regarding human rights are disingenuous and are political in nature. Let me explain that. First of all, the target of these criticisms tends to be rather biased: they will go after Saudi Arabia, but there are equal or even greater violations against Canadians in Israel, for example, from the same region, where Canada’s very careful about being critical. So there is an extreme bias diplomatically, but also you have to understand that in Canada, this kind of complaint is part of what I would call “domestic virtue propaganda politics,” in other words, the Liberal government has some political advantage domestically to be seen as a government that is promoting human rights, women’s rights and so on, and so it’s part of that politics, but it's disingenuous. When you look at the human rights violations within Canada itself and other places in the world where Canada could have an influence to make things better, it does not. It choses its occasions and its targets and it’s part of the domestic propaganda politics here in Canada. That’s the picture from this side.

The other thing I would say is that, why did this happen? How is this possible that a large nation like the Kingdom of Saudi Arabia would have such a virulent reaction, to spontaneously go out like this? I’ve got some things to say about that. The kingdom is under tremendous pressures: it’s in a violent war with Yemen, which it’s having a hard time with, with the new technology of small hand-held missiles that are anti-vehicle, anti-ship and everything, it is having a really hard time and it’s inexperienced in this war, so it’s taking big losses, the oil shipments have been affected by this war; the domestic problems within Saudi Arabia are significant, I mean I could go on. Saudi Arabia is extremely vulnerable to social media-induced internal revolution. If there is an important faction of Saudis who are discontent, especially the middle or professional class and a large fraction of women, this could really snowball into something significant. Saudi Arabia has no experience with social media openness, they haven’t developed the kind of propaganda handling methods that the West have developed to its openness. They are very vulnerable to this and they’re very nervous about it. If you look at all of this, you can kind of understand their virulent reaction.

Sputnik: Conversely when we look from Saudi Arabia's point of view in terms of exports, Saudi Arabia is one of Canada's largest export markets in the region. How  would this freeze on new projects and investments affect Canada’s economy?

Saudi Arabia Mulls Implementing Additional Measures Against Canada - FM
Dr. Denis Rancourt: Canada’s main technological export is related to cars and vehicles and car parts, and it is trying to develop an important military vehicle technological export market and it has been successful with the largest contract of its type with Saudi Arabia recently, worth some $15 billion. I don’t think that contract is in jeopardy, but future contracts of that type are on hold at the moment. This is very significant because it’s really the only area where Canada can have a technological export market that's significant; so that’s going to hurt. I think it was a mistake by an inexperienced Canadian government, that is not really concerned about human rights. They just made a big mistake here and I think they’re going to suffer the consequences.

Sputnik: What’s your take on the weapons sale side of this equation?

Dr. Denis Rancourt: Like I said, it’s a big deal, $15 billion or so; it is going to go ahead as far as I can see. But there aren’t going to be any more for some time, that would be my sense of it. They’re not going to make another deal like this with Canada; why would they? Why would they when they can be criticized in this way publicly? They don’t need Canada. It’s part of being allied in the world in these wars, like the regime change war in Syria, that has now failed; it’s part of being allied in this way with Canada and the United States, Israel and so on to have this trade, but they don’t have to do it, so they can easily drop this. It’s not really that important in terms of the trade itself, it’s more about cohesion among allies and ensuring that trade is between allies in order to not advantage opposing blocs.

000000
Popular comments
All western countries should be following Canadas lead.....Saudi Arabia is a fascist sexist regime currently illegally destroyung its neighbor Yemen as well as sponsoring ISIS terrorists everywhere....
Tazo
8 August 2018, 20:59 GMT1
000000
ivanwa88, Canada is a far better country tha n Saudi Arabia.... Your right to say Canada shouldn't be supporting Nazis of the Ukraine..... But Saudi Arabia is the Nazi regime of the middle East in every way..... Saudi invasion of Yemen is the same as the Nazi invasion of Poland.......but these countries are very different from each other.....Canada supporting Ukrainian Nazi is covert and the mass majority of Canadians would not support this if the media were honestly telling Canadians the truth which is not the case the Canadian media follows the MSM deep state lies....so Canadians don't know their troops ate supporting Ukrainian Nazis.... Saudi Arabia is an openly theocratic fascist state that literally kills anyone who speaks of freedom.....and they are openly illegally invading Yemen...as well as openly supporting ISIS and other terrorist groups..... Very different countries
Tazo
9 August 2018, 02:55 GMT1
000000
Newsfeed
0
New firstOld first
loader
LIVE
Заголовок открываемого материала
Access to the chat has been blocked for violating the rules . You will be able to participate again through:∞. If you do not agree with the blocking, please use the feedback form
The discussion is closed. You can participate in the discussion within 24 hours after the publication of the article.
To participate in the discussion
log in or register
loader
Chats
Заголовок открываемого материала
Worldwide
InternationalEnglishEnglishMundoEspañolSpanish
Europe
DeutschlandDeutschGermanFranceFrançaisFrenchΕλλάδαΕλληνικάGreekItaliaItalianoItalianČeská republikaČeštinaCzechPolskaPolskiPolishСрбиjаСрпскиSerbianLatvijaLatviešuLatvianLietuvaLietuviųLithuanianMoldovaMoldoveneascăMoldavianБеларусьБеларускiBelarusian
Transcaucasia
ԱրմենիաՀայերենArmenianАҧсныАҧсышәалаAbkhazХуссар ИрыстонИронауОssetianსაქართველოქართულიGeorgianAzərbaycanАzərbaycancaAzerbaijani
Middle East
Sputnik عربيArabicArabicTürkiyeTürkçeTurkishSputnik ایرانPersianPersianSputnik افغانستانDariDari
Central Asia
ҚазақстанҚазақ тіліKazakhКыргызстанКыргызчаKyrgyzOʻzbekistonЎзбекчаUzbekТоҷикистонТоҷикӣTajik
East & Southeast Asia
Việt NamTiếng ViệtVietnamese日本日本語Japanese中国中文Chinese
South America
BrasilPortuguêsPortuguese
NewsfeedBreaking
09:38 GMTEndangered Siberian Tiger Killed in Russia's Primorsky Territory
09:36 GMTNYT: Israel Was Behind Cyber Attack on Iran's Fuel System in October
09:34 GMTOver 60 People Remain Hospitalised After Mine Accident in Southwest Siberia
09:16 GMTGerman Police Thwart Illegal COVID-19 Vaccination Campaign
09:06 GMTNew Social Ad on Domestic Violence Showing 'Bruised Kate Middleton' Causes Stir Online
08:37 GMTStowaway From Guatemala Hiding in American Airlines Plane's Landing Gear Found Unharmed - Video
08:20 GMTUK May Announce NHS Reshuffle to Tackle Omicron Variant, Sajid Javid Says
08:17 GMTUNRWA Funds Are Depleting and Palestinian Refugees Already Feel the Burden
08:05 GMT'Ronaldo's Only Ambition is to Retire With More Ballon d'Or Trophies Than Messi', Claims Award Chief
07:24 GMTDanger Zone: Tom Cruise Hangs From Wing of Flipping Plane for New Mission: Impossible Movie - Photos
06:56 GMTItalian Police Raid Juventus Offices as Part of Probe Into Player Transfers
06:37 GMTBJP MP Gautam Gambhir Receives Third Death Threat After Similar Messages From 'Daesh Kashmir'
06:06 GMTQueen Elizabeth II Picks Up Her 'MI6 Anti-Hacker Encrypted' Phone 'for Two People Only'
06:01 GMTFukushima Plant's Operator Starts Surveys to Prepare for Wastewater Dump, Reports Say
05:52 GMT'All Mouth and No Trousers': Boris Johnson 'Fed Up' With Priti Patel Over Migrant Channel Crossings
05:35 GMTFood Prices in Israel Much Higher Than in EU, Here's Why
04:46 GMTCOVID-19 Live Updates: Israel Closes Borders for Two Weeks Over Omicron Strain Fears
03:42 GMTHis Life, His Rules: Biden Spotted With Mask Down on His Chin While Inside Shop
03:28 GMTSouth Africa Laments Travel Restrictions, Calling Them ‘Punishment’ For ‘Excellent Science’
02:57 GMTGhislaine Maxwell Ready to Take Stand at Trial to 'Save Her Own Life' - Report