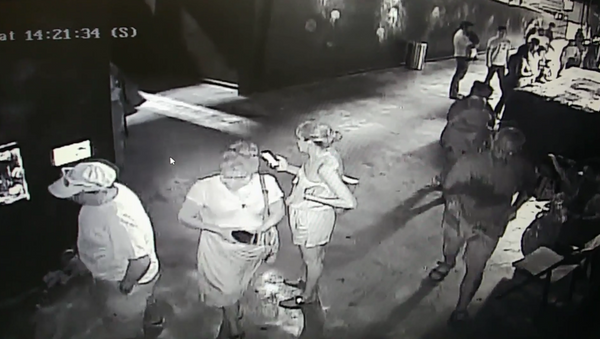 Texas' San Antonio Aquarium released footage on Tuesday showing the moment a horn shark was stolen by patrons, who wheeled it out of the facility in a baby stroller over the weekend.

The security footage shows a man, identified by the Leon Valley Police Department as 38-year-old Antone Shannon, repeatedly placing his left arm inside a petting pool before pulling out the shark and carrying it out of the camera's view. A second man is seen following Shannon with a blanket, and a third accomplice, a woman holding a toddler, stands by a stroller next to the pool.

Jen Spellman, the aquarium's general manager, told Dallas News that after the shark was nabbed, it was wrapped in a wet blanket and placed inside a bucket. Smugglers then hid the container inside a stroller to disguise the fish as a sleeping baby.

But officials with the aquarium weren't fooled. After Spellman was tipped off by a fellow employee, she confronted the trio in the parking lot about their thievery. As the story goes, Shannon refused to let Spellman search his vehicle, saying that he needed to leave immediately because his son was ill. Shannon then sped off into the sunset with his new friend, ditching his accomplices at the aquarium.

Therapy in an Aquarium: Dolphins Teach Kids With Special Needs How to Communicate

The shark was ultimately recovered on Monday after Leon Valley police officials were able to track down Shannon, who had already placed the 16-inch-long shark, named Helen by the aquarium, in a tank.

When confessing to police, Shannon reportedly told officers that he commited the crime because he wanted to replace a horn shark of his that had died, Dallas News reported.

Leon Valley Police Chief Joseph Salvaggio told local Texas station KSAT 12 that when he was informed of the theft, he thought it was part of a prank, since Shark Week, a full seven days of shark coverage on the Discovery Channel, had only just wrapped up.

"When we first got the call, we thought it was kind of a hoax, being that it was Shark Week last week," Salvaggio told the station. "But it turns out someone actually went inside the aquarium there in Leon Valley and stole a horn shark."

Referring to the surveillance footage, Salvaggio stressed that the sharknappers had some knowledge of aquariums. "It's very obvious the person knows what he's looking for and went there specifically for that area," he said.

In a statement released on Tuesday, the San Antonio Aquarium offered more insight on the matter, revealing that Shannon and his male accomplice emptied out the bleach solution inside the bucket they intended to use into the exhibit's cold water filtration system. This resulted in harm to several tanks that held seahorses and jellies. Aquarium officials were able to successfully reverse the contamination by deploying sodium thiosulfate, which counteracted the bleach within seconds.

Shannon is currently being held at Bexar County Jail and is facing charges of theft. Salvaggio told NBC 5 that authorities are consulting with the National Oceanic and Atmospheric Administration to determine whether or not federal charges can be brought against the 38-year-old. Police have not announced charges against the two accomplices, who have yet to be identified.