Pre-Historic 'Romeo & Juliet' Rushing to Their Afterlife on 'Chariot' Unearthed 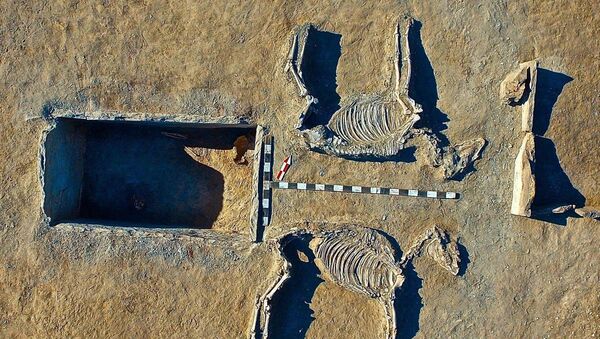 © Photo : Igor Kukushkin
Subscribe
The unusual grave, which likely belonged to an elite charioteer, had been previously raided, but the bones and overall composition remained intact.

Archeologists have unearthed a peculiar 5,000-year-old grave in the Karaganda region of Kazakhstan, containing the bodies of a man and a woman, laying side-by-side. But the most unusual thing about the find is how the grave was arranged —two horses were buried near it, back-to-back, in a chariot-like composition. According to archeologists, in ancient times, horses depicted in such a manner usually referred to battle chariots, suggesting the man in the grave might have been an elite charioteer.

The grave was robbed a long time ago, but the bones and stone installations around it remained intact. When it was unearthed, the man was found holding a quiver and a dagger, while the woman had bracelets and jewelry adorning her.

Lead archeologist Dr. Igor Kukushkin is so far uncertain whether the female was the charioteer's spouse or just a lover destined for his afterlife. It is also unknown if either of the parties sacrificed themselves willingly to join their other half in the afterlife or not. At the same time, the archeologist was pretty confident that the horses had been killed specifically for the burial rite.

000000
Popular comments
He has made peace with his wife now she has this attention and has been called elite.