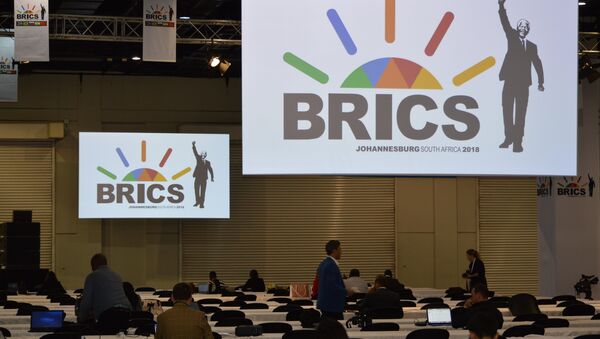 The BRICS summit in Johannesburg has brought the leaders of the group together to discuss various global issues that the world faces today. The meeting is taking place against the background of the so called “trade wars” started by the US.

Throughout 2018, trade protectionism set the tone for US international policy. In March, Donald Trump raised tariffs on steel and aluminum, not sparing even his closest allies. This move only generated anxiety and suspicion all over the world.

However, Trump's actions can give BRICS countries the opportunity to restructure the world’s trade system. As the isolation of the United States grows, other participants in international trade are beginning to rebuild themselves politically.

"Without a doubt, this is important for the growing influence of BRICS in terms of world trade. In fact, Trump is just showing, without any added colors, what big international trade actually looks like. This world trade serves the interests of the old powers,” Pennaforte said.

Thus, the BRICS countries are becoming a point around which countries that are in search of an alternative to the US-led international scheme can gather.

"From a practical point of view, Trump has no minimal economic grounds. Most American production is located outside the country, in China, and in other countries. Thus, the unleashed trade war, which is a kind of revenge in the form of customs duties, will have a detrimental effect US industry itself in the medium term,” the specialist said.

BRICS: 'Declaration Shows That Global Trade Must Be Strengthened' – Professor
He further stressed that the positive effect of protectionist shocks, lies in the fact that they should push the world towards regrouping its political forces in search of an alternative.

According to Pennaforte, BRICS will follow the direction of the two main countries, whose influence is growing each day.

"Under the leadership of Putin in recent years, Russia has been reborn as a geopolitical player. It, just like China had [reforms] in its [military] arsenal. I believe that these two countries will be ahead, promoting changes in the international arena,” Pennaforte concluded.

The BRICS summit also highlighted issues that are taking place not just outside the bloc, but within it as well. Brazil and South Africa are mired in a struggle between various political forces, while India hasn't hidden its discontent with the Chinese New Silk Road project.

In order to work through these issues, Russia and China are taking on the initiative to build a new system of international relations.

'By Helping Each Other BRICS Nations Could Diversify Their Economies' – Prof.
Pennaforte said that in the case of Brazil, the political crisis has dragged on for more than three years and it has actually weakened Brazil’s position not only within the BRICS but also in the international arena.

“In terms of significance, the government of [Michel] Temer led Brazil to a near zero mark. With the help of instruments of soft power, Brazil could have a much greater weight in those areas where China does not have a strong influence, but, unfortunately, at the moment we are inactive," Pennaforte told Sputnik.

The specialist further noted, with regret, that the country is essentially inactive within the BRICS, drawing attention to the decline of Brazil's foreign policy ambitions during the period of Temer's tenure.

The tenth annual BRICS summit gathered the leaders of the bloc’s emerging economies in the city of Johannesburg, South Africa for a three-day event.

The views and opinions expressed by Charles Pennaforte are those of the specialist and do not necessarily reflect those of Sputnik.