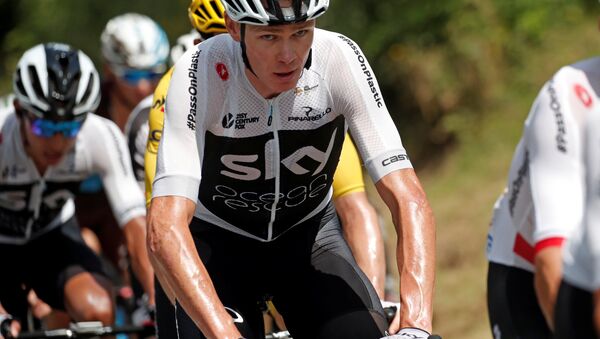 © REUTERS / Benoit Tessier
Subscribe
Chris Froome's hopes of a record-tying fifth Tour title after stage 17 were dim when he was heading for the team bus. But things went from bad to worse after he had a misunderstanding with an overzealous police officer.

Team Sky leader Froome, 33, a four-time Tour de France champion, fell away on the final climb of stage 17 and crossed the line in eight place, 48 seconds behind his teammate Geraint Thomas and one minute, 35 seconds behind stage winner Nairo Quintana.

The Kenyan-born Briton was cycling back to the Team Sky bus with a black rain jacket on, while some riders were still climbing towards the summit finish. Unfortunately, a police officer mistook him for a cycling fan that used to ride up the mountains stages to watch the race, and tackled him off the bike.

Photos on social media show a gendarme pulling Chris Froome by the arm, with his bike laying on the ground.

Team Sky said that the rider was left unharmed.

The incident came a day after police accidentally pepper-sprayed riders when trying to disperse protesting French farmers who blocked the road with bales of hay. The Tour de France was briefly halted after a large group of cyclers, including Froome, needed eye treatment due to the tear gas.

In 2017, he won the yellow jersey for the fourth time in five years.

000000
Popular comments
Headline should read Froome violently assaulted by French state thug. Even if it had been a fan this uniformed heavy had no right to assault them.