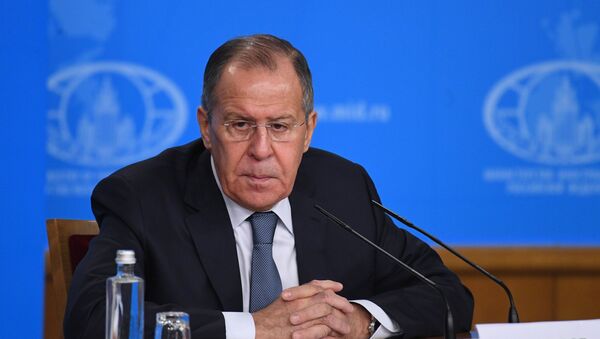 MOSCOW, July 24 (Sputnik) - The possible withdrawal of Iranian troops 100 kilometers (60 miles) from the Israeli border was discussed among other issues during the visit of Russian Foreign Minister Sergey Lavrov to Israel, Kremlin aide Yury Ushakov said.

He added that Russian President Vladimir Putin had discussed the issues concerning the Syrian settlement with Netanyahu.

"The other steps are taken as a follow-up to this discussion, including Lavrov and Gerasimov's visit to Israel now," Ushakov added.

Caught Red-Handed? Why Israel is Allegedly 'Stealing' Clouds From Iran
Lavrov and Chief of Russia's General Staff Valery Gerasimov held a meeting on Monday with Israeli Prime Minister Benjamin Netanyahu in Jerusalem, and the sides discussed the progress in the counterterrorism operation in southern Syria, as well as ensuring security along Israel's borders.

Earlier, a high-ranking source in the Israeli government told Sputnik that Israeli leadership at a meeting with Lavrov and Gerasimov expressed interest in the full withdrawal of Iranian forces from Syria, but did not reject any Russian proposal.

The Russian Foreign Ministry has also commented on the media reports that Israel had rejected Moscow's proposal to withdraw the Iranian forces in Syria to a distance of 100 kilometers (some 62 miles) from the Israeli border.

"These reports are not true. I can state responsibly that the talks between [Russian] Foreign Minister Sergey Lavrov and Chief of the General Staff Valery Gerasimov with Prime Minister Netanyahu were very constructiveю The Israeli leadership highly appreciated the Russian efforts to create a zone of de-escalation in southwestern Syria, which included the withdrawal of all non-Syrian armed groups from this region," deputy head of the ministry's information and press department Artyom Kozhin said in written commentary.

A number of Western media outlets, Reuters in particular, earlier speculated that during a meeting with a high-ranking Russian delegation  in Jerusalem on July 23, Israeli Prime Minister Benjamin Netanyahu allegedly rejected a Russian proposal to allow the Iranian forces to stay in Syria at a distance of not less than 100 kilometers from the disengagement line on the Golan Heights.

The situation in Syria and the problem of Iran's military presence there have become the main topics of the talks in Jerusalem with the participation of Netanyahu and Israeli Defense Minister Avigdor Lieberman, which lasted more than two hours.

Israel Can Pressure US to Lift Russia Sanctions if Iran Leaves Syria - Journo
According to the Haaretz newspaper, Israel also demanded to withdraw long-range weapons allowing the Iranians to overcome the buffer zone, to remove air defense systems covering them, and to stop cross-border delivery of Iranian weapons to Syria and Lebanon.

The publication cited an unnamed Israeli source, who said that the Israeli authorities prefer to act now, rather than wait for Iran to accumulate "hundreds and thousands of missiles" in Syria and turn it into "another Lebanon."

Israel has repeatedly voiced concern over alleged Iranian military presence in Syria, while Tehran insisted that it has exclusively sent military advisors to the Arab Republic in order to help Damascus fight terrorism.