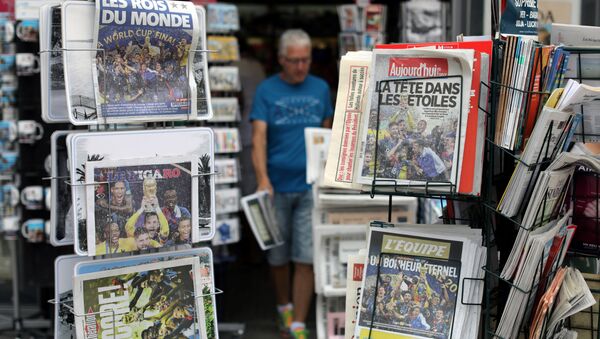 © REUTERS / Eric Gaillard
Subscribe
As the World Cup came to a close, President Vladimir Putin announced that Russia will prolong visa-free entrance to the country for all football fans with fan IDs until the end of the year.

Sputnik discussed this issue with Manuel Ochsenreiter, director of the German Center for Eurasian Studies and editor-in-chief of the German news magazine "ZUERST!"

Sputnik: Western media has been portraying Russia in a negative light causing many football fans to withhold from attending the event, do you think the World Cup has changed the way Western people think of Russia?

Croatia Midfielder Modric Wins Golden Ball Award at 2018 FIFA World Cup
Manuel Ochsenreiter: I think it’s very interesting since a lot of foreigners came to Russia, came to different cities of Russia especially, we're not just speaking about Moscow or St. Petersburg, we speak also about cities like Rostov, which are usually not number one on the list of European tourists visiting Russia.

I’m convinced that the vast majority of the international football fans coming to Russia come back and they’ll spread the news about a country with great hospitality, with great people, and with a very harmonic way of conducting this World championship. That is, of course, at the same time [rejecting] the mainstream media and also in some part, mainstream politics' criticism of Russia.

I think the impact for Russia is very, very positive and it is almost impossible for Western or European mainstream media to object to that in a capable way.

Sputnik: So you think the World Cup has really changed how a lot of Westerners will think of Russia in the future as well?

Manuel Ochsenreiter: We have to think that every football fan who has come to Russia to watch one match, or to watch more matches will come back and he will tell his friends, and the friends will tell their friends, there is no filter anymore. The filter used to by the media, it used to be the journalists, it used to be the politicians, but now we have on the first scale what the people say, what they've experienced. In this term it is very positive and I think it will last for a very long time.

Trump Calls FIFA World Cup in Russia One of Best Organized Ever
So that means the mainstream media and mainstream politics are losing their grip. People inform themselves also with other media sources, we have now a rising, complex array of alternative media, which is portraying the situation completely differently, and I would say more realistically.

It's more honest and in a true way, so this means that if the mainstream media had the power, then nobody would’ve come to Russia, because everybody would’ve been afraid of drinking a beer with 'novichok'.

So even that shows that the mainstream media in Europe have already lost their grip because the people came, they didn’t stay at home.

Sputnik: What are your thoughts on how Russia hosted the World Cup?

Actually I’ve been coming for many years to Russia and I know it’s not true, and the fans that came saw was a very warm reception of international football fans and I mean really the individuals, all the volunteers, all the students who didn’t perhaps speak perfect English, but did everything to help. And this is what many of the Europeans experienced when they were there.

WATCH FIFA World Cup in Russia End With Fireworks as France Wins Tournament
The experience was maybe not perfect when it comes to language or to that kind of service, but they experienced the hospitality, full of warmth and which was not a materialist hospitality. They didn’t bring you somewhere because you paid them, they did this because they wanted to show their country in its best colors, in the best way, and I think it was very successful.

That was maybe one of the outstanding experiences that the vast majority of the fans will tell their friends and their colleagues about.

Sputnik: Some have said that they feel that misinformation in the media has actually really backfired once the people get out of the country and see for themselves, what are your thoughts on that?

Manuel Ochsenreiter: If I lie to you several times about a certain place, that if you go there it will be terrible and when you go there and see it’s not terrible, it backfires, of course, much, much more on the mainstream media, in mainstream politics that it could’ve harmed Russia even if it would've been true, but why? Because it hits the core of all that is in the context of media.

Sputnik: Russia actually has decreed that all the football fans who came to Russia and have fan IDs will be able to continue with the visa-free regime until the end of 2018. Do you think a lot of fans will actually take advantage of that opportunity?

The visa regime between Russia and Europe and the Schengen area is maybe one of the most harmful borders we have with each other because it prevents the Europeans from going to Russia to see with their own eyes and to hear with their own ears what the realities are, and on the other side it is also harmful for Europe because for us, it is very hard to invite Russian friends.

The views and opinions expressed by Manuel Ochsenreiter are those of the speaker and do not necessarily reflect the position of Sputnik.