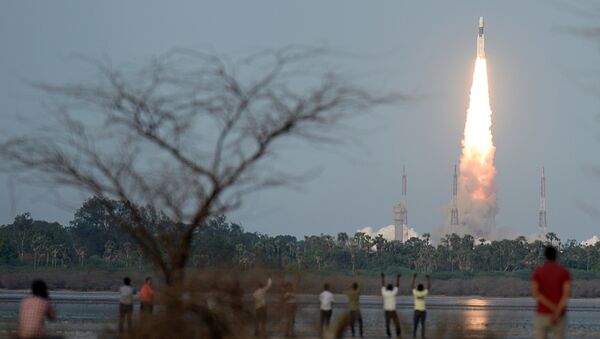 India has only a 0.6 percent share of the global satellite launch industry despite a series of advancements in space exploration; mainly due to the weight limit of its older polar satellite launch vehicle.

New Delhi (Sputnik) — On Sunday the Indian Space Research Organization (ISRO) successfully conducted a ground test of its high-thrust version of the Vikas Engine that will enhance payload capability of the space agency's launch vehicles. The test, which lasted for 195 seconds, was conducted at ISRO's Propulsion Complex (IPRC), Mahendragiri in the southern Indian state of Tamil Nadu.

"This ground test has validated the performance adequacy of the Vikas Engine for its use in the upcoming second developmental flight of GSLV Mk-III. This engine will improve the payload capability of PSLV, GSLV, and GSLV Mk-III launch vehicles," a statement issued by ISRO reads.

"All the propulsion parameters during the tests were found satisfactory and closely matched the predictions," ISRO added.

India to Explore Nuclear Energy Source in Moon's Southern Hemisphere
The Vikas Engine is the workhorse liquid rocket engine powering the second stage of India's Polar Satellite Launch Vehicle (PSLV) — a cost-effective launch vehicle with a 1.75 ton capability to the 600 km sun-synchronous polar orbit. In the last few years, it has attracted satellite owners from across the world seeking to successfully launch their satellites in a cost-effective way.

ISRO has been working on reusable launch vehicles, cryogenic and semi-cryogenic engines and technology development of super heavy lift vehicles. The maximum launch capability to GTO of other space agencies is — USA: 14 tons, China: 13 tons, Europe: 10.5 tons, Russia: 6.25 tons, and Japan: 8 tons. The private US firm SpaceX recently demonstrated the launch of a heavy lift launch vehicle, Falcon Heavy, which can carry 26.7 tons to GTO.