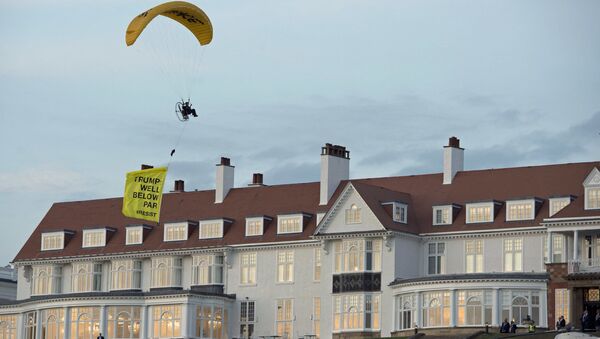 The Greenpeace paraglider who flew within 200 feet of US President Donald Trump on Friday at POTUS’ Turnberry Golf Resort in Scotland has been arrested, Police Scotland revealed on Sunday.

Scotland's national police force made the announcement via social media this weekend, stating that a "55-year-old man has been arrested and charged in connection with an incident when a powered parachute was flown near Turnberry Hotel around 9.45 p.m. on Fri 13 Jul."

​Although the agency did not offer any further details on the paraglider's arrest, it did note that a second man was arrested the same day "in relation to alleged threatening and abusive behavior on the beach at Turnberry." It's unclear if the two arrestees knew each other.

"This was a major and complex policing operation involving thousands of officers that impacted right across Scotland," Mark Williams, assistant chief constable of Police Scotland, said in a statement released via Twitter. "Our priority throughout was to protect the president, maintain public safety and facilitate thousands of people across Scotland to exercise their right to protest peacefully."

"I would like to thank all of the officers and staff from Police Scotland and elsewhere that worked together in helping us achieve this and in particular those who took part in the protests in Glasgow, Dundee and Edinburgh for their good behaviour," he added.

As Sputnik previously reported, Greenpeace UK's Friday protest saw a demonstrator fly just a few feet above 45 with a banner that read, "Trump Well Below Par #Resist." According to Ben Stewart, spokesperson for the organization, the stunt was coordinated to highlight that Trump is "the worst president ever."